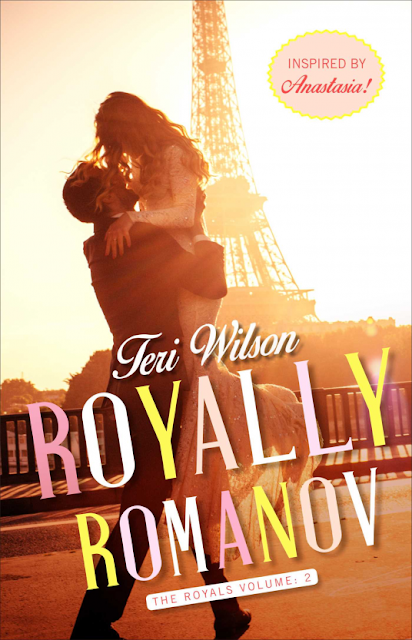 In this charming modern day retelling of the 1956 classic Anastasia, a museum curator falls for a mysterious man who may or may not be a long lost heir to Russia’s imperial Romanov dynasty.

Finley Abbot is organizing the most prestigious art exhibit of her career at the Louvre museum—a retrospective of art from the House of Romanov. But the sudden appearance of Maxim Romanov threatens to turn her into the biggest laughingstock of the art world. When she finds herself falling in love, she realizes there’s even more at stake than her career. How can she trust a man with her whole world when he can’t remember a thing about his past?

After suffering a violent blow to the head, Maxim’s only clue to his identity is a notebook containing carefully researched documentation in his own handwriting indicating that he is the sole surviving descendant of the Grand Duchess Anastasia, previously thought dead in the murder of her family during Russia’s Bolshevik revolution. His struggle to put the mysterious pieces of his past back together leads him to Finley. At first, she’s convinced Maxim is nothing but a con artist. But there’s something undeniably captivating about the beautiful, brooding man who claims to be searching for his identity—something Finley can’t quite bring herself to resist. When he reveals a secret about one of the imperial Fabergé eggs in the collection, she accepts he may actually be telling the truth. But as soon as Finley and Maxim act on their feelings for one another, Maxim is confronted with evidence that calls into question everything he’s begun to believe about himself.

*Publisher provided ebook in exchange for an honest review.

I haven't read the first book in the Royals series, but I noticed that each has different main characters and when I saw that Royally Romanov is a retelling of Anastasia, I became eager to start it.

The story begins with Maxim in the hospital and we quickly get the gist that he doesn't remember who hit him or why. Things move at a fast pace but not so much that you can't keep up with the characters, and I did manage to warm up to them easily. Maxim came off as a nice guy that just wanted to understand what was going on and Finley was working hard to move up in her career at the museum and let go of what she'd experienced back in the states.

Loved the Paris setting; I could picture the scenes so vividly even with the slightest detail given. And Finley's job sounds so cool. I found it amazing that she was involved in the collecting of historical pieces that had once been forgotten. When Maxim approached her, I knew there must have been something prior to his incident that would have led him to Finley. But it was interesting how she connected immediately and related with him on an intense level based on her own terrifying experience. She was hesitant to trust him at first, which is understandable considering he was a person of interest to the police and the fact that there had been other con artists in the past that have tried to come off as having ties to the Romanov line. But she simply could not stay away and just had to know the truth, in spite of the warnings from her superior at the museum.

The mystery surrounding Maxim was the biggest part of the story and what kept me so interested. I liked the items that came about and the information learned at the cathedral. However, things started to unravel rather quickly toward the end, and I also felt like their feelings for each other intensified too fast, but I wasn't bothered by that too much as I wanted to know if Maxim truly was connected to Anastasia and the identity of the person who had struck him. I learned the answer to both but after that was cleared up, the story didn't seem to end right. At least not for me. I feel like more was needed in regards to Maxim's character and what was next for him.

To conclude, Royally Romanov is a good story with an interesting twist on a classic and a subtle mystery that will hold your attention. Although I had a few minor issues, I still liked it for the most part.

Teri Wilson is a romance novelist for Harlequin, Pocket Books and Tule Publishing. Her novels UNLEASHING MR. DARCY and THE ART OF US are both now Hallmark Channel Original Movies, and she currently has two other films in development with the Hallmark Channel. Teri is also a contributing writer at HelloGiggles.com and Teen Vogue, covering books, pop culture and everything royal. She's crazy about cute animals, vintage fashion and traveling.