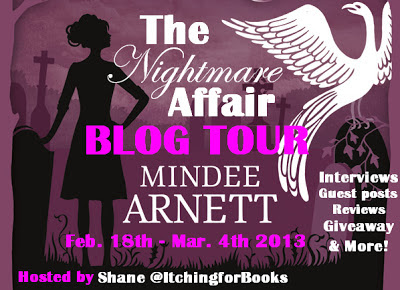 Description via Goodreads:
16-year-old Dusty Everhart breaks into houses late at night, but not because she’s a criminal. No, she’s a Nightmare. Literally. Dusty is a magical being who feeds on human dreams.

Being the only Nightmare at Arkwell Academy, a boarding school for magickind, and living in the shadow of her mother’s infamy is hard enough. But when Dusty sneaks into Eli Booker’s house, things get a whole lot more complicated. He’s hot, which means sitting on his chest and invading his dreams couldn’t get much more embarrassing. But it does. Eli is dreaming of a murder. The setting is Arkwell.

And then it comes true.

Now Dusty has to follow the clues--both within Eli’s dreams and out of them--to stop the killer before more people turn up dead. And before the killer learns what she’s up to and marks her as the next target.

*TWO SIGNED copies will be available for a giveaway open to International readers!!

Feb. 19
The Book Slayer *Guest post as Dusty
A Trail of Books Left Behind *Review & Dream cast (blogger's choice)
Coffee, books and me *Review
The Book Goddess *Review
YA Between the Lines *Review

*No Stops on Sunday.

*No stops on Sunday.

About the Author
Mindee Arnett lives on a horse farm in Ohio with her husband, two kids, a couple of dogs, and an inappropriate number of cats. She’s addicted to jumping horses and telling tales of magic, the macabre, and outer space. She has far more dreams than nightmares.