Waiting on Wednesday #72: Deeper & And We Stay 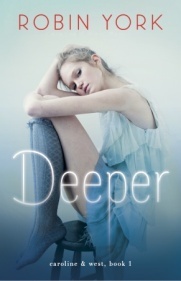 In this New Adult debut by Robin York, a college student is attacked online and must restore her name—and stay clear of a guy who’s wrong for her, but feels so right.

When Caroline Piasecki’s ex-boyfriend posts their sex pictures on the Internet, it destroys her reputation as a nice college girl. Suddenly her once-promising future doesn’t look so bright. Caroline tries to make the pictures disappear, hoping time will bury her shame. Then a guy she barely knows rises to her defense and punches her ex to the ground.

West Leavitt is the last person Caroline needs in her life. Everyone knows he’s shady. Still, Caroline is drawn to his confidence and swagger—even after promising her dad she’ll keep her distance. On late, sleepless nights, Caroline starts wandering into the bakery where West works.

They hang out, they talk, they listen. Though Caroline and West tell each other they’re “just friends,” their feelings intensify until it becomes impossible to pretend. The more complicated her relationship with West gets, the harder Caroline has to struggle to discover what she wants for herself—and the easier it becomes to find the courage she needs to fight back against the people who would judge her.

When all seems lost, sometimes the only place to go is deeper.

When high school senior Paul Wagoner walks into his school library with a stolen gun, he threatens his girlfriend Emily Beam, then takes his own life. In the wake of the tragedy, an angry and guilt-ridden Emily is shipped off to boarding school in Amherst, Massachusetts, where she encounters a ghostly presence who shares her name. The spirit of Emily Dickinson and two quirky girls offer helping hands, but it is up to Emily to heal her own damaged self.

This inventive story, told in verse and in prose, paints the aftermath of tragedy as a landscape where there is good behind the bad, hope inside the despair, and springtime under the snow.

I'm in need of some emotional and dramatic reads and these two sound right up my alley. Hopefully the story are just as intense as their descriptions.

Email ThisBlogThis!Share to TwitterShare to FacebookShare to Pinterest
Labels: And We Stay, Blog Hopping, Deeper, Memes, Waiting on Wednesday