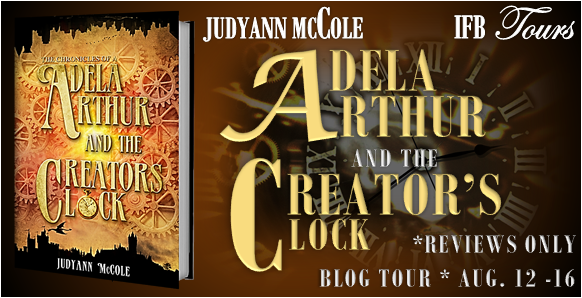 I will be hosting the Judyann McCole Reviews Only Blog Tour & Giveaway for her debut YA novel Adela Arthur & The Creator's Clock, book one in The Chronicles of A.

To Whom Ever This May Concern;
I wish I could tell you the contents of this book were purely fictional. That I, Adela Arthur, was just a normal sixteen year old from Portland and that dragons, giants, elves and mermaids were just myths.  I wish these were legends shared from crazy old grandparents to crazy old grandparents around campfires. After all, that is what I used to believe.
I never would have thought they lived on the other side of our mirrors in a world called Cielieu. But they do…
I never would have thought there were humans, better known as Volsin that lived among them with the ability to create light from a single thought.  But there are…
I never would have thought I was one of them… But I am…
I am the last Arthur and I was brought to the human world after a Volsin, filled with greed, began to strip the light from our kind.
The human world was supposed to be a safe haven… but he’s found us and the only way to stop him is to go back to Cielieu and begin training as a student in the Elpida Castle of Light.
Like I said I wish the contents of this book were purely fictional and not my life…
ADELA ARTHUR

About the Author
Judyann is a lover of Books, Florence + Machine, The color Teal, Asian Food, Chocolate, Pandas, and The Rain. She's also a fan of writing in odd places like in bathtubs, under staircases, in a tree, or maybe zoo.


Judyann was born in Montreal, Canada and a few years later her parents moved home to the States where she's currently attending College.


*Remember, the more tours you participate in will increase your chances of winning in the IFB year end raffe for hosts:)


*THE BOOK WILL BE PROVIDED IN PDF & MOBI. PLEASE POST YOUR REVIEWS BEFORE OR DURING THE TOUR ON GOODREADS & AMAZON.


NOTE: PLEASE DO NOT POST NEGATIVE REVIEWS ON YOUR STOPS THAT IS LESS THAN 3 STARS AND IS HURTFUL TO THE AUTHOR. IN DOING SO, YOU WILL AFFECT THE PROMOTIONAL ASPECT OF THE TOUR. THANK YOU FOR UNDERSTANDING.