As part of the book's release day, Mia March has provided a guest post & is contributing copies of her latest, Finding Colin Firth. See below:

In no particular order, I offer you my favorite Firth films (say that 5 times fast)! These are movies I watch over and over, particularly never tiring of looking at Colin Firth for two hours:

1) Pride & Prejudice: Ah, Mr. Darcy, of the intense, smoldering gaze. There is no other Mr. Darcy for me than Colin Firth in the BBC miniseries. And there are 6 hours of Colin gazing.

2) Bridget Jones’ Diary: Ah, Mr. Darcy again! Even as Mark Darcy, in his reindeer sweater and less than smoldering gaze, he is integrity personified. See it for the fight scene with Hugh Grant, if not for Colin’s fun performance as a slightly stodgy barrister.

3) A Single Man: Heartbreaking and intense. Colin plays an English professor grieving over his late partner in the 1960s. He was nominated for an Oscar for this role.

4) Fever Pitch: How I love this movie! Colin with unruly hair and unmatched passion for a British football team, which gets in the way of his romance with a fellow English teacher.

5) The Importance of Being Earnest: Funny, funny, funny, set in 1890s London. Based on the Oscar Wilde play and also starring another favorite of mine, Rupert Everett.

8) Then She Found Me: A gem. Colin plays the somewhat harried father of Helen Hunt’s student and helps Helen come to terms with both her husband walking out on her and her birth mother’s sudden appearance in her life. Love this movie.

9) Love Actually: No editorializing required. A Christmastime must. An all-year-round must. Sometimes I just watch the wonderful opening! Everyone’s in this movie, from Colin to Liam Neeson to Hugh Grant to Emma Thompson to Alan Rickman to Laura Linney.

10) Girl With a Pearl Earring: The painter Vermeer and Scarlett Johannsen as his muse/maid. A beautiful film. If you look up the word longing in the dictionary, there might be a little picture of Griet and Vermeer.

In my new novel, FINDING COLIN FIRTH, the three main characters each wants to find him for a very different reason, but that wanting is something I (and many women) identify with very much! Rumor has it that the actor is coming to a small Maine town to film scenes from his new movie, and 22 year old Bea, nervously connecting with her birth mother; 38 year old Veronica, baker of healing pies and an extra on the film, and 29 year old married journalist Gemma with a big secret, each have ties to the actor that bring them together. Many of his films are discussed in the novel. If you have a chance to read FINDING COLIN FIRTH, I hope you enjoy it! 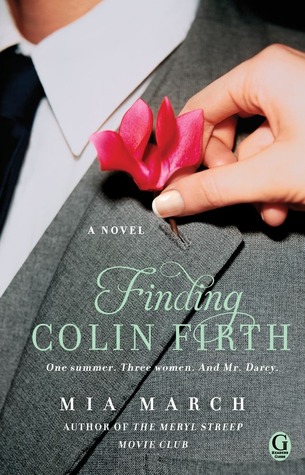 Synopsis via Goodreads:
After losing her job and leaving her beloved husband, journalist Gemma Hendricks is sure that scoring an interview with Colin Firth will save her career and marriage. Yet a heart-tugging local story about women, family ties, love, and loss captures her heart— and changes everything. The story concerns Bea Crane, a floundering twenty-two-year-old who learns in a deathbed confession letter that she was adopted at birth. Bea is in Boothbay Harbor to surreptitiously observe her biological mother, Veronica Russo—something of a legend in town—who Bea might not be ready to meet after all. Veronica, a thirty-eight-year-old diner waitress famous for her “healing” pies, has come home to Maine to face her past. But when she’s hired as an extra on the bustling movie set, she wonders if she is hiding from the truth . . . and perhaps the opportunity of a real-life Mr. Darcy.
These three women will discover more than they ever imagined in this coastal Maine town, buzzing with hopes of Colin Firth. Even the conjecture of his arrival inspires daydreams, amplifies complicated lives, and gives incentive to find their own romantic endings.

Mia March is the author of THE MERYL STREEP MOVIE CLUB (June 2012, Simon & Schuster) and FINDING COLIN FIRTH, coming July 2013 (a spin-off of TMSMC). She lives on the coast of Maine, the setting of the novels, with her ten-year-old son and their very sweet beagle.