Synopsis via Goodreads:
Of the various star systems that make up the Confederation, most lie thousands of light years from First Earth—and out here, no one is free. The agencies that govern the Confederation are as corrupt as the crime bosses who patrol it, and power is held by anyone with enough greed and ruthlessness to claim it. That power is derived from one thing: metatech, the devices that allow people to travel great distances faster than the speed of light.
Jeth Seagrave and his crew of teenage mercenaries have survived in this world by stealing unsecured metatech, and they're damn good at it. Jeth doesn’t care about the politics or the law; all he cares about is earning enough money to buy back his parents' ship, Avalon, from his crime boss employer and getting himself and his sister, Lizzie, the heck out of Dodge. But when Jeth finds himself in possession of information that both the crime bosses and the government are willing to kill for, he is going to have to ask himself how far he'll go to get the freedom he's wanted for so long. 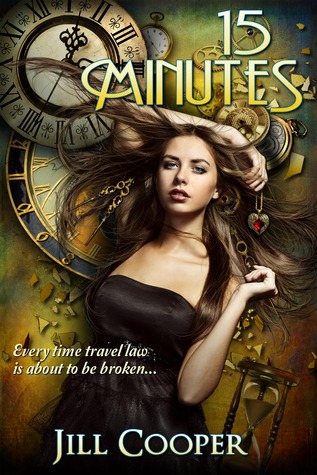 Synopsis via Goodreads:
I have 15 minutes to save my mother’s life….

15 minutes is all the Rewind Agency gives you in the past, but for Lara Crane it’s enough time to race through the city, find her mother, and stop her from being killed in a mugging that happened over ten years ago.


But that’s not how it happened. The story she’s been told all her life is a lie and when Lara takes a bullet meant for her mother, her future changes forever.


The love of her life acts like a stranger. Her simple life is replaced with a giant house, glamorous clothes and a new boyfriend.

Except someone knows her secret. And he will try to stop her at every turn as she races against the clock to unravel a dangerous conspiracy.

15 Minutes is an edgy high octane YA thriller that can be described as Back to the Future meets Inception where the people Lara trusts change in an instant. She is in a timeline she doesn't understand, and is about to make one fatal mistake as she faces an enemy so familiar, he’s family.

Both seem really interesting with the science fiction/time period concepts and I'm eager to dive into their pages. Plus, their covers are delicious :)

Posted by Shane @ItchingforBooks at 9:10 AM