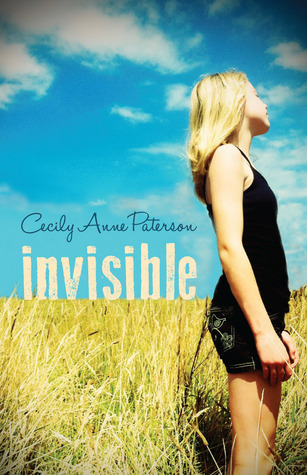 Jazmine Crawford doesn't make decisions. She doesn't make choices. She doesn't make friends. Jazmine Crawford only wants one thing: to be invisible. For Jazmine, it's a lot easier to take out her hearing aid and drift along pretending that nothing's wrong than it is to admit that she's heartbroken. She starts to come out of her shell when she's forced to be in the school play and even makes friends with bouncy Gabby and chocolate-loving Liam. But can she stand up to the school bully, and is she strong enough to face the truth about what really happened to her dad?

*Got a free copy from Amazon Kindle

This story was different to me in some ways. It involved aspects I'd never read about before, like the main character having a disability, and the fact that the main setting is Australia. With that said, it was both intriguing and refreshing to experience something...out of the ordinary to me.

Jazmine had a lot to deal with; she lost her father a few years ago and his death placed a huge gap in the relationship she had with her mother. Then again, there was more to his death that her mother kept hidden from Jaz and that was the main problem keeping them from re-establishing the bond they had before. Aside from that, Jaz has her hearing issue to cope with and pretending to be invisible helps her shield herself from the scrutiny of outsiders. She finally starts to believe she's making friends but they turn out to be the wrong crowd for her, hence, how she ended up working on the school play.

Throughout the story, we get to see Jazmine learning to open up. Partly due to her expressing her feelings more in words, and trying something new. She starts really good friendships and even experience some romance. The best part for me though, was when she and her mother started to get back that closeness they once had. It was all going well until a certain nasty individual returns to Jazmine's life and causes chaos, then we really discover just how emotionally wrecked the main character is.

I think one of the reasons I liked this story is because I can relate to Jazmine, being that she's shy and sometimes fearful about opening up to people. The story really tugs at your heart with some of the things she'd even consider in private. Like questioning her self-worth for instance. There were times I just wanted to reach into the page and give her tight hug. She needed it. Thankfully, towards the end, Jazmine allowed happiness to find her.

Overall, Invisible was a really good story. This young character was well developed and very interesting to learn about. And I liked how the author pulled me into what was happening right up till the very last line. Cecily definitely made a fan out of me and I'd love to read more of her work.

Cecily Paterson grew up as an expat in Pakistan until the age of 16. She went to a British day school and then an international boarding school so her accent has always been a bit of a mix.

She studied french, law and politics and university before getting into editing, where she's stayed ever since.

Cecily has wanted to be a bestselling author since the age of 8 when she won the White Essay Cup at her school, beating 10 and 11 year olds to the prize.

She is the mother of four children and lives in a beautiful little tourist town in New South Wales, Australia.

Posted by Shane @ItchingforBooks at 9:14 AM