IFB is hosting the cover reveal of Madison Louise's The Hurricane. This is the second book in her Storm saga. See cover below, and continue for all the blogs participating along with the giveaway! 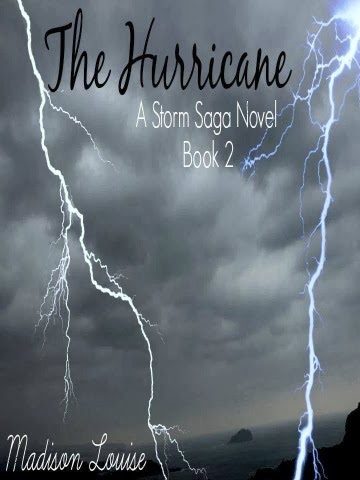 Synopsis via Goodreads:
Ever since the storm that changed Millicent, and her brother’s lives, giving them storm powers, Millicent had never been truly happy, but with Felix back, and all of them together, things were just like they used to be before the storm—minus the 17th century—it was time to try school again, but together this time, and without everything that almost separated them again. But just as everything was falling back into a normal steady pace, things start to fall apart again. A new enemy, Tyler, doesn’t want them to be around, he wants them dead, wants to finish what his cousins failed to do months before.

Millicent tells the others to start training, getting ready for the fight that is sure to come, but things fall apart farther and farther, until Millicent is just holding onto a thread, and that thread is Felix. But only for a time. Because sometimes, even love has its limits. Even though that love had time to grow and strengthen.

With the new threat looming over their heads, the family scattered, Millicent isn’t sure how this will end happily, for her, for Felix, for her family. Especially with something comes into Felix and Millicent’s life, and changes it forever.

Will they all be able to come together again, and face the threat? Or will they bend to those who wish to destroy them?

About the Author
Madison Louise decided at a young age that she wanted to write. Since she was nine she has written many books. Now Madison is a teen pursuing her dream of becoming best seller author. She spends her time writing, reading and drawing, the occasional Just Dance when she has the time. Madison lives in Ohio, with her parents, her sister, and all their pets.
madisonlouise.weebly.com | @AuthorMadison | facebook.com/MadisonLouiseYAauthor

a Rafflecopter giveaway
Posted by Shane @ItchingforBooks at 2:03 PM