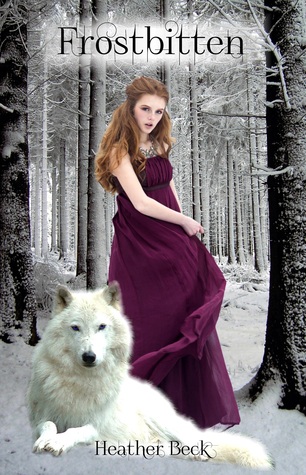 Seventeen-year-old Anastasia Lockhart has never led an easy life, but when she starts getting into serious trouble, she’s sent to live with her grandparents in Cedar Falls. The small, picturesque town hasn’t changed since she visited four years ago, with one exception – the presence of a handsome, mysterious boy named Frost. Despite warnings from her grandparents and friends to stay away from Frost, Anastasia can’t deny their attraction, and the more time they spend together, the deeper in love they fall. Unfortunately, Frost has a secret that is beyond Anastasia’s wildest imagination, and she soon finds herself in the midst of a supernatural legend that has haunted Cedar Falls for years.

Can Anastasia and Frost’s love really overcome anything, or are their fates much darker?

Heather Beck is a Canadian Author and Screenwriter who began writing professionally at the age of sixteen. Her first book was published when she was only nineteen years old. Since then she has written eleven well-reviewed books which have sold in six continents.

Heather received an Honors Bachelor of Arts degree from university where she specialized in English and studied an array of disciplines. Currently, she is working on two young adult novels and has three middle grade anthologies slated for publication. As a screenwriter, Heather has multiple television shows and movies in development. Her short films include Young Eyes, The Rarity, Too Sensible For Love, and Circular.

Besides writing, Heather’s greatest passion is the outdoors. She is an award-winning fisherwoman and a regular hiker. Her hobbies include swimming, playing badminton and volunteering with non-profit organizations.

A shiver of excitement ran throughout Anastasia’s body. She knew that it wasn’t a good idea to miss the assembly or venture into the woods, but she didn’t care. Waiting until the hallway was empty, she grabbed her coat and then hurried through the back door.
The early afternoon sun was high in the sky, shining brightly and making the snow-covered trees and ground sparkle as if it was a winter wonderland. Amongst the beautiful scenery, Anastasia noted a pair of footprints leading deep into the woods. She followed them and soon came upon Frost, whose back was turned to her as he stared into the distance.
As if sensing her presence, he turned around, smiled and said, “You came.”
“There was no need for you to doubt that,” Anastasia replied, smiling back at him. “So, what are we doing out here?”
“Why tell when I can show?” Frost said, guiding her forward.
After a few minutes of walking, they came to a bend in the woods. Anastasia heard ducks quacking nearby, and when they turned around the corner, she saw a small frozen pond filled with colorful mallards. When the ducks saw them, they began to quack louder.
Frost led Anastasia to a flat rock that made the perfect seat for two. Since the sun was shining upon it, he only had to sweep away a light dusting of snow before gesturing for her to sit down. As they both did so, the ducks waddled excitedly toward them.
“They’re so pretty,” Anastasia commented, especially noting the brilliant hues of green on some of their feathers, “but why do they stay? It’s not like there’s anything here for them.”
“That’s where you’re wrong,” Frost said, retrieving a small bag from his coat pocket. “They fly here almost every day, knowing they’ll be fed. That sounds like a sweet deal to me.” He opened the bag, offering the contents to her.
Anastasia took a handful of the bread crumb, peanut and bird seed mix, and then gently tossed it toward the eager ducks. She’d been starting to wonder what that bulge in Frost’s pocket was, and she would’ve never guessed it was duck feed. She almost snickered at the thought.
“I’ve never skipped school to do something like this,” Anastasia said, taking more of the mix and sprinkling it a couple of feet in front of her. “Now I truly know what a badass you are.”
“I promise you’re not missing anything important. They have these assemblies every month, and it’s basically an excuse for the principal and teachers to tell each other what a wonderful job they’re doing – in front of an audience, of course.”
“Of course. Otherwise, what’s the point?”
Frost smirked before quickly turning serious. “Sometimes I can’t stand being in school. People think they know you, but they don’t.”
Soothingly, Anastasia placed her hand on Frost’s knee. “You never have to pretend around me. I understand what you’re going through at school, probably better than anyone else.”
“I have secrets, Anastasia.”
“We all do. So, why don’t you start by telling me one of yours?”
Appearing hesitant, Frost looked at the ground, as if he was contemplating something very serious. However, when he lifted his head a moment later, his disposition had changed and he now wore a smile, although Anastasia sensed that it wasn’t completely sincere.
“Well, it’s not exactly scandalous,” Frost began slowly, “but one of my biggest passions is music. I’ve been playing the guitar since I was ten, and I even write my own lyrics – not that they’re any good.”
“I’d love to hear them,” Anastasia pried gently.
“I have been working on something new.” Looking somewhat shy but still keeping his gaze on Anastasia, Frost began to sing in a low, husky voice:

As if by chance
It only took one glance
Girl with green eyes, let’s not say our goodbyes
I know life’s rough
But I feel you’re tough
Wish you could see, how good you look to me
Then all your tears
And even all those fears
Will disappear, forever far from here

Silence fell over the woods once Frost had finished singing, and his cheeks flushed a pale shade of red. “I know it’s not perfect, and I swear I play the guitar better than I write.”
“It’s beautiful,” Anastasia whispered, deeply touched by the sentiment of Frost’s lyrics.
“The inspiration just sort of hit me,” Frost whispered back.
Swept up in the moment, Anastasia’s pulse quickened, and ever so slowly, she leaned in closer.

Posted by Shane @ItchingforBooks at 11:45 AM