Review: Wait for You by J. Lynn 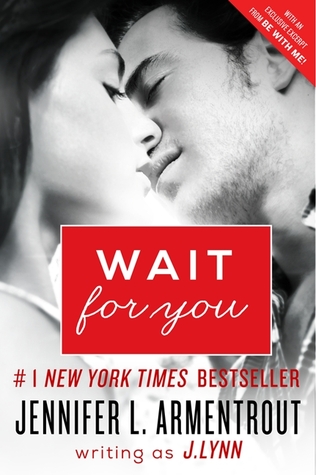 Some things are worth waiting for.

Traveling thousands of miles from home to enter college is the only way nineteen-year-old Avery Morgansten can escape what happened at the Halloween party five years ago--an event that forever changed her life. All she needs to do is make it to her classes on time, make sure the bracelet on her left wrist stays in place, not draw any attention to herself, and maybe--please God--make a few friends, because surely that would be a nice change of pace. The one thing she didn't need and never planned on was capturing the attention of the one guy who could shatter the precarious future she's building for herself.

Some things are worth experiencing.

Cameron Hamilton is six feet and three inches of swoon-worthy hotness, complete with a pair of striking blue eyes and a remarkable ability to make her want things she believed were irrevocably stolen from her. She knows she needs to stay away from him, but Cam is freaking everywhere, with his charm, his witty banter, and that damn dimple that's just so... so lickable. Getting involved with him is dangerous, but when ignoring the simmering tension that sparks whenever they are around each other becomes impossible, he brings out a side of her she never knew existed.

Some things should never be kept quiet.

But when Avery starts receiving threatening emails and phone calls forcing her to face a past she wants silenced, she's has no other choice but to acknowledge that someone is refusing to allow her to let go of that night when everything changed. When the devastating truth comes out, will she resurface this time with one less scar? And can Cam be there to help her or will he be dragged down with her?

And some things are worth fighting for.

I finished Wait for You a few weeks ago but allowed it to sit in because I wasn't sure of my overall conclusion. In the beginning of the story, I was very entertained and pulled in. It seemed like something I would enjoy. But then there were these little things that started to bug me. Like Cameron's use of the word "sweetheart". I hated how often that word came up and I wish it had been "babe" or maybe nothing at all. Then there was the whole past that Avery was concealing. I thought that she kept that hidden for too long and it annoyed me how Cameron was so open yet she was still keeping secrets. It seemed like it was all for the drama, one that I felt to be unnecessary.

Like I said, the story was initially interesting, and I liked the way Cameron and Avery were with each other, but after the middle it started to prolong too much. Another thing I have to point out (even though I usually don't because my own books and posts are far from perfect) is the fact that there were quite a few typos throughout the book. The reason why I mentioned that is because the book is published by an imprint of HarperCollins and even though typos are found in nearly every single book, I wasn't expecting that much in one that was traditionally published.

I still gave Wait for You three stars because I liked the writing (in spite of the instances of typos), and there were moments between the characters that I enjoyed. It seems like an interesting series and I'm curious about the second book which focuses on Cameron's sister and friend.

Posted by Shane @ItchingforBooks at 9:52 AM