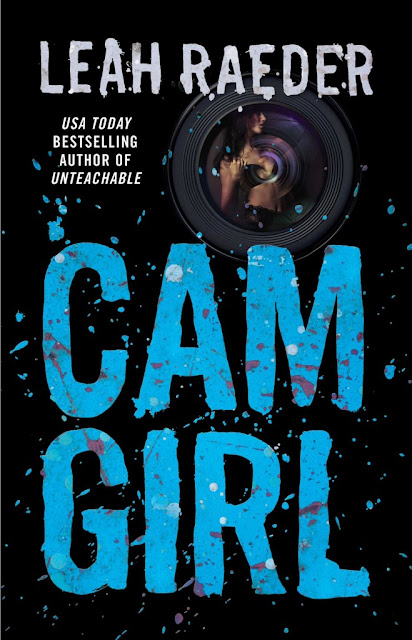 Vada Bergen is broke, the black sheep of her family, and moving a thousand miles away from home for grad school, but she’s got the two things she loves most: her art and her best friend—and sometimes more—Ellis Carraway. Ellis and Vada have a friendship so consuming it’s hard to tell where one girl ends and the other begins. It’s intense. It’s a little codependent. And nothing can tear them apart.

Until an accident on an icy winter road changes everything.

Vada is left deeply scarred, both emotionally and physically. Her once-promising art career is cut short. And Ellis pulls away, unwilling to talk about that night. Everything Vada loved is gone.

She’s got nothing left to lose.

So when she meets some smooth-talking entrepreneurs who offer to set her up as a cam girl, she can’t say no. All Vada has to do is spend a couple hours each night stripping on webcam, and the “tips” come pouring in.

It’s just a kinky escape from reality until a client gets serious. “Blue” is mysterious, alluring, and more interested in Vada’s life than her body. Online, they chat intimately. Blue helps her heal. And he pays well, but he wants her all to himself. No more cam shows. It’s an easy decision: she’s starting to fall for him. But the steamier it gets, the more she craves the real man behind the keyboard. So Vada pops the question:

Can we meet IRL?

Blue agrees, on one condition. A condition that brings back a ghost from her past. Now Vada must confront the devastating secrets she's been running from—those of others, and those she's been keeping from herself...

Cam Girl was a very interesting story. It took me some time to get into it but once I did I ended up liking it for the most part. I found it intriguing in the sense that there were various aspects to the story aside from the characters figuring out their lives. There was a mystery as to what really happened on the night of the accident, and later on there was this whole thing with "Blue" and his identity. And even though it was kind of weird and not many people would do that, but I liked how Vada and a particular character developed this bond over the accident. In a way, they held on to their individual suffering through the other and I was happy that in the end, it resolved and they started on the journey of moving on.

In regards to the characters though, I didn't connect with either Vada or Ellis. I didn't like the way Ellis was, I thought she could be stronger when it came to Vada and often times she just seemed too clingy. I wanted her to realize that she deserved so much more and would start to live for herself. I couldn't get over what she did to gain Vada's attention, even though it wasn't necessary, it was dishonest and she should have fought harder and been truthful about herself. As for Vada, she was a very complicated character. I understood her individual struggles, and the pain of not being able to do something she was so passionate about, but there were times I just couldn't take her complacent and self-pitying ways. And some of her decisions were just mind-baffling.

But like I said, it was an interesting story and I enjoyed it. There were sexual moments that made me cringe a tad, mostly because it seemed to happen too much, but it was tolerable for a new adult novel. I also liked the whole concept of "Blue", and the conversations he and Vada would have. I had two people in mind that could possibly be Blue, and even leaned mostly toward one in particular when Vada met him. But when his true identity was unraveled, I realized how many times I had missed the clues and in a way, I wanted it to be someone else aside from who it really was. Regardless, it was a good idea to make Blue be that person in particular. It made sense because of what this person was struggling with.

As always, the writing was superb. The kind of creative writing that puts your mind to work. Leah is just awesome and I commend her for writing these kind of stories that are somewhat few in the world of books and are very much needed for people like Vada and Ellis. Their characters are relatable in that sense. Cam Girl is a great story. Give it a read.

About the Author
LEAH RAEDER is a writer and unabashed nerd. Aside from reading her brains out, she enjoys graphic design, video games, fine whiskey, and the art of self-deprecation. She lives with her very own manic pixie dream boy in Chicago.
(And she still writes pretentiously lyrical fiction.)
www.leahraeder.com | facebook.com/leahraederbooks