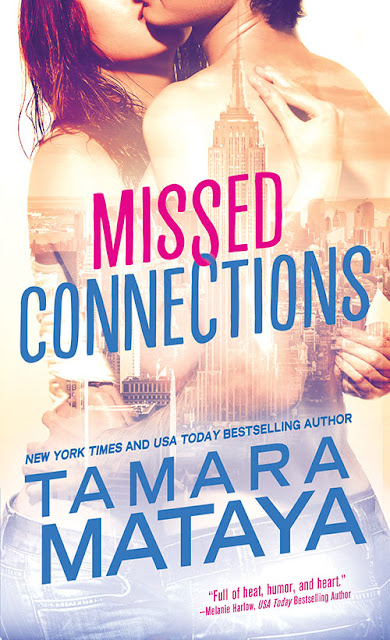 Missed Connection: I saw you standing there, and I was struck by your eyes. Gorgeous, but not as gorgeous as your smile.

Thanks to her job at a crazy New Age spa, what should have been a sizzling NYC summer is being hijacked by demanding hippie bosses. To unwind, Sarah spends her nights cruising Missed Connections, dreaming of finding an uber-romantic entry all about her. Of course, the moment she finds that Missed Connection, real life comes crashing down around her in a night of unbridled passion with someone completely different: totally off-limits Jack.

Gorgeous and wealthy, hot as sin, Jack can give Sarah everything she needs-except an emotional connection. That she gets from her Missed Connection, the romantic stranger who never fails to make her swoon. But there's only so much of Sarah to go around. Torn between the bad boy she can't keep and the sensitive stranger who bares his soul online, her heart and body are soon in two very different relationships...or are they?

*Published approved request via Netgalley in exchange for an honest review.

Initially, I was a little iffy about the story and how it was going, but Missed Connections turned out to be an entertaining read for me. Sarah's character may not rub some people the right way, but I like that she was imperfect and messy.
I got her desire to be with someone who was willing to commit and had a stable life. And I got why she was hesitant to start anything substantial with Jack because of his lifestyle, or what she deemed his life to be about: clubbing and a lot of girls. She also believed he couldn't open up to her and she wanted more than just physical. So her reasons for not wanting to establish anything serious with Jack was understandable.

Like many people, Sarah went online in hopes of finding someone she could connect with. I've never even glimpsed the Missed Connections section of Craigslist so I was curious as to how it worked. It seemed pretty interesting though. The fact that someone saw you and immediately felt intrigued, but didn't get the chance to talk to you or were afraid to try in that moment. So they posted about it online, using descriptions, in hopes that you'd see it. Sarah kept checking the posts, hoping that someone may have seen her and wanted to connect. She continued to do so until one day it happens and she begins talking to this guy. At first, Sarah has no idea who it is, but then she thought about someone she met at work and believed it to be him.

Speaking of work. Aside from the issue with her lovelife and wanting to connect on a deeper level with someone, Sarah was dealing with a lot of nonsense at her new job. First of all, not many people would put up with such crap and would probably quit in their first week. But not Sarah, she needed the money to pay for her expenses while seeking another job. And I understood why she'd stay with those weirdos, no matter how cult-like they seemed. Desperation will make you stay in jobs that make you unhappy, but you don't really have a choice but to stay with it. I found Sarah to be rather strong for staying with New Age Spa for as long as she did. I mean, she even considered trying to understand their ways and being more open-minded about things. But that retreat was the last straw and I knew she just couldn't stay with them any longer. It became too much.

Thankfully, she had Jack to call on, and I wish that she would've realized that from the beginning that he was always there for her, in spite of what she thought. Sure Jack had trouble opening up to people, but he was trying, and Sarah never really gave him the chance to do that until later on. He was still wrong for doing what he did, but in the end, I understood his intentions and still liked him anyway. The guy was just too hot.

Like I said, Missed Connections was an entertaining read with some hot moments here and there. You'll either laugh along to the madness or cringe and turn away at how much Sarah put up with the hippies. Whatever the case, it was a quick and interesting story with crazy characters and I liked it all.

About the Author
Tamara Mataya is a New York Times and USA Today bestselling author, a librarian, and a musician with synesthesia. Armed with a name tag and a thin veneer of credibility, she takes great delight in recommending books and shushing people. She puts the 'she' in TWSS and the B in LGBTQIA+. She’s the co-creator of Pitchmas, a bi-annual pitch contest for writers, and as a freelance editor, has worked with NYT Bestselling authors.

Posted by Shane @ItchingforBooks at 11:42 AM