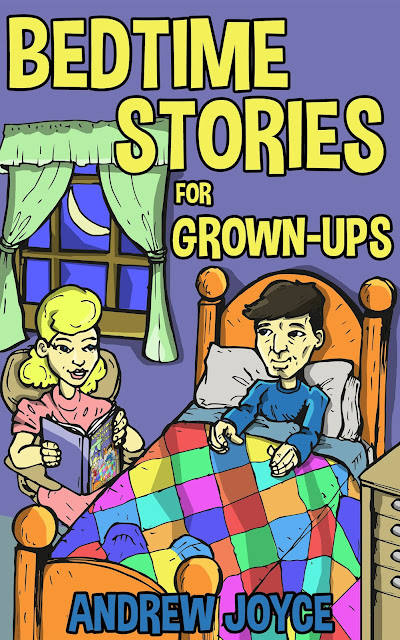 
Synopsis via Goodreads:
Bedtime Stories for Grown-Ups is a jumble of genres—seven hundred pages of fiction and non-fiction … some stories included against the author’s better judgment. If he had known that one day they’d be published, he might not have been as honest when describing his past.


Here is a tome of true stories about the author’s criminal and misspent youth, historical accounts of the United States when She was young, and tales of imagination encompassing every conceivable variety—all presented as though the author is sitting next to you at a bar and you’re buying the drinks as long as he keeps coming up with captivating stories to hold your interest.

Comprised of 218,000 words, you’ll have plenty to read for the foreseeable future. This is a book to have on your night table, to sample a story each night before extinguishing the lights and drifting off to a restful sleep.

Hello, my name is Andrew Joyce. I have a new book out entitled Bedtime Stories for Grown-Ups. It came about because my editor hounded me for two years to put all my short stories into one collection. Actually, it was supposed to be a two-volume set because there was so much material. I fended her off for as long as possible. I didn’t want to do the work of editing all the stories. There were a lot them. But she finally wore me down. Instead of two volumes, I put all the stories into a single book because I wanted to get the whole thing over with. I had other books to write.

Bedtime Stories is made up of fiction and nonfiction stories and some of ’em are about my criminal youth. I must tell you, I never thought any of these stories would see the light of day. I wrote them for myself and then forgot about them. By the way, there are all sort of genres within its pages, from westerns to detective stories to love stories and just about anything else that you can imagine.

There are a whole lotta stories in the book—700 pages worth. Enough to keep you reading for the foreseeable future.

This tale is mostly true.
My great-grandmother crossed the Great Plains in a covered wagon … going to the promised land of California. The year was 1866. She left St. Louis, Missouri, eight months after the end of the Civil War.
Her name was Rebecca Joyce. Her husband, Michael, drove the wagon as Rebecca walked alongside. Then they would switch, and Michael would walk and Rebecca would drive the team. They could not afford the extra weight of even one person. The wagon carried all the things needed to start a new life. Rebecca walked a thousand miles of their two-thousand-mile trek.
I know this because my family still has her diary. It recounts the harrowing journey across an unexplored land.
One hundred and sixty-six men, women, and children left on that fateful journey. One hundred and fifteen lived to see California—fifty-one souls did not.
Forty-two days after leaving Missouri, Rebecca reloaded her husband’s long gun as he fought off Indians from under their wagon. Twelve people were killed in that encounter. When they crossed the Green River, six of their party drowned. On the high plains, cholera hit; thirty-three died over a two-day period.
I tell you of these things for a reason. You younger folks of today have it easy, but still you complain. Well, what do you think of this? Rebecca crossed a continent—an untamed continent—with just an iPhone 1 and only 2G service! And no video camera! Can you imagine the hardship? Can you picture what that poor woman had to go through to keep up with the goings-on of the Kardashian clan and what was trending on Twitter? The horror!
The next time your phone takes all of 0.0002 seconds to connect to Facebook and you think that’s an eternity, please remember Rebecca Doyle fighting off disease and Indians and—worse still—being in the dark on the latest news concerning Kim’s butt.
Andrew Joyce
Slightly under the influence on this Christmas Day, 2016

Andrew Joyce left high school at seventeen to hitchhike throughout the US, Canada, and Mexico. He wouldn't return from his journey until years later when he decided to become a writer. Joyce has written five books. His first novel, Redemption: The Further Adventures of Huck Finn and Tom Sawyer, was awarded the Editors' Choice Award for Best Western of 2013. A subsequent novel, Yellow Hair, received the Book of the Year award from Just Reviews and Best Historical Fiction of 2016 from Colleen's Book Reviews.

Joyce now lives aboard a boat in Fort Lauderdale, Florida, with his dog, Danny, where he is busy working on his next book, tentatively entitled, Mahoney: An American Story.