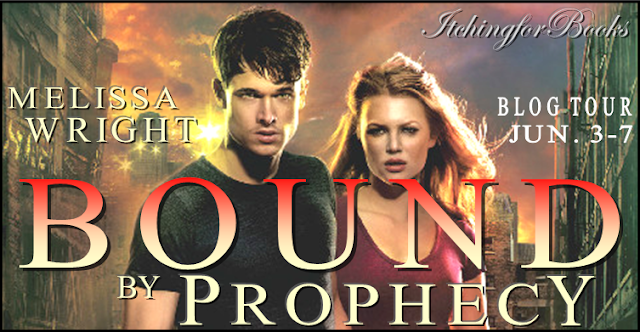 The Melissa Wright Bound by Prophecy (Descendants Book #1) Blog Tour has ended! Thanks to everyone who participated :)


Twenty-two-year-old Aern is done watching his brother destroy the only thing that matters. He never wanted to take Morgan's place among council, never wanted to rule their hidden world. But when the key to the prophecy is found, a young girl named Brianna whom Morgan will destroy, Aern knows he has to take action. What he really wants is for things to go back to normal. But now he’s kidnapped a girl, and his brother's men are after him. His only hope is to join with the Division, but they have plans of their own, and it's the last thing Aern is willing to do. Emily just wants her sister back. She doesn't care about the prophecy, or know what's at stake. But when she goes after Aern, the truth of the matter uncoils, and Brianna isn't the only one who's in danger. Suddenly, they’re at the center of a secret war, and unless they can work together, they'll both have a sacrifice too big to make.

About the Author
Melissa Wright is the author of the Frey Saga and the upcoming Descendants series. Melissa spends her time working on novels, but when not writing she can be found on goodreads and pinterest.

Posted by Shane @ItchingforBooks at 12:11 PM