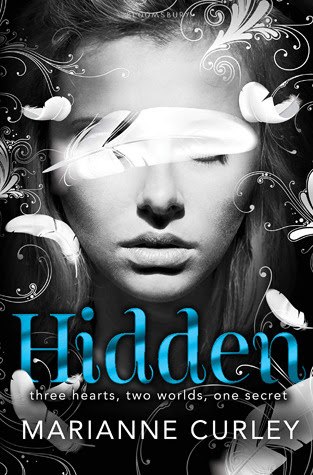 
For as long as Ebony can remember, she’s been sheltered. Confined to her home in a secluded valley, home-schooled by her protective parents, and limited to a small circle of close friends. It’s as if she’s being hidden.
But something is changing in Ebony. Something that can’t be concealed. She’s growing more beautiful by the day, she’s freakishly strong, and then there’s the fact that she’s glowing.
On one fateful night, Ebony meets Jordan and she’s intensely drawn to him. It’s as if something explodes inside of her—something that can be seen from the heavens. Ebony still doesn’t know that she’s a stolen angel, but now that the heavens have found her, they want her back.

Hidden had an intriguing concept. There was the potential to be a really wonderful book but due to several factors the story wasn't as impressive as I wanted it to be. I had a hard time trying to collect my thoughts to write a review that wouldn't come off overly critical in any way because I respect the author and I want to give her my honest opinion in the most respectful manner I can. So here goes.

I liked the general setting; the world building was good. But at the same time it was a bit tamed. I'll leave it there because I liked where Marianne was going with it and there's something unique even though she incorporated elements heard of throughout time. Character wise, I didn't connect with Ebony or Jordan much. I found the latter a bit wimpy as oppose to what he's overcome in past events, though, it's understandable anyone would be frightened should they find themselves faced with such celestial beings and otherworldly situations. Ebony on the other hand confused me on a number of occasions. There were times she was willing and eager to learn more about herself but when things were getting unraveled it seemed she just suddenly changed her whole attitude. I was annoyed with her throughout the book but not enough to stop reading because I was interested to discover how things would end.

Someone I liked having around was Amber. She was such a great friend and I would love to have her POV on things in the second book, possibly. Her character was so easy to love. Amber was next to perfection and I loved her personality. I think Marianne did a good job bringing Amber to life in my head. It almost felt like she was my friend in real life.

The pace was a bit slow for me. There were details I thought could have been shortened, while others seemed bundled towards the end. However, like I've mentioned before the story was intriguing with all the heavenly aspects and the inclusion of romance. I thought the overall writing was good and the author's ability to describe the surrounding was impeccable because I envisioned everything she wrote. Though I had an issue with the pace, the cheesy moments, and my inability to connect with the main characters, I am interested in seeing how the story continues from here on.

Posted by Shane @ItchingforBooks at 2:42 PM