Review: Anything to Have You by Paige Harbison 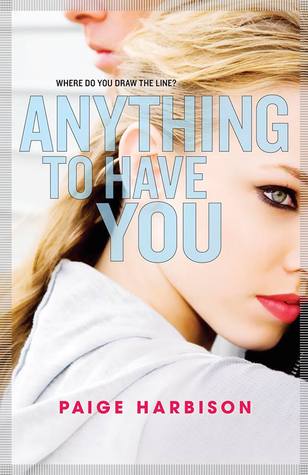 When I started reading Anything to Have You, I was convinced the story would turn out to be a good read. The characters seemed fun-loving, witty, and appealing. Even though it went downhill for me, with the party and Natalie waking up to realize that she'd gotten so wasted, that she blacked out and couldn't remember who she had sex with, because in fact, she knew she did. There are so many things wrong with that. The main thing being: hello? If you got drunk to the point where all logical thinking and clarity flew out the door, and you don't know who took advantage of you, because obviously someone took advantage of your drunken state, then that is in fact rape. I didn't like that such a serious issue was not brought up. If anything, it made the characters seem like that was a norm, like everything about that was cool. It is not. And I found that very disturbing. Still, it wasn't a bad read.

Let's detour from these teenagers a moment to examine their home life. Natalie's father bugs me. There's no way a parent should be that buddy-buddy with their kid and be so happy about them going to parties, where the opposite sex and plenty of alcohol would be. He was a teenager once so of course he should know the deal. And I felt his reaction to her being hungover a bit casual if not oblivious. The stern parent role should have come into play on many occasions, regardless of how smart and responsible he considered his daughter to be. If Natalie had gone out without his permission, I could have accepted that more than him just simply saying, "go ahead. go to this wild party. drink a lot, lose control, black out, then get taken advantage of."

Aside from that awful event and the way in which it was handled, or rather not handled, Natalie didn't really win me over. She cracked easily under peer pressure, never truly spoke her mind, and basically appeared as a lapdog for her so-called best friend, Brooke. I would have loved for her to be stronger and not so wimpish. Brooke was more of that and then some.

Speaking of the latter, Brooke rubbed me the wrong way since the party as well. In fact, everyone turned out to be off since the party. Anyway, back to the wild flower. Brooke is your usual spoiled girl who loves attention. She's the kind of girl who doesn't care if every single guy in the world loves her, and she gets pissed if one of these guys likes somebody else. Talk about messed up. When you look into her life outside of this, she had issues with her family, which obviously stemmed her need for attention else where, whether it be in drinking or hooking up for the fun of it. She was portrayed in such a trashy way throughout the book that it overwhelmed me. Not only trashy by her grotesque habits, but also in her selfish tendencies towards her boyfriend, deeming their relationship outdated, and also towards the person that's supposed to be her best friend since how long. It took a long time for her to come back down to earth and tap into her real feelings. However, I felt really let down by her character for the most part. When I found out how it really was from the getgo, with Natalie and Aiden, Brooke turned me off even more. Then again, Aiden wasn't so perfect either. I wanted to slap him so bad for putting Natalie through that. Not only did he come off as a rapist from jump, because once again, that whole event didn't seem right to me, I thought he should have told Natalie the truth from the moment he realized she didn't know what really happened. Jerk. No matter how sweet the book tried to make him out to be, he was in my eyes an idiot.

So, what did I like about the story? The pacing, I flew through in no time, and the writing was good. It kept me interested enough to want to finish the book, in hopes that everything would work out. And you know what, even though it enraged me that their reaction to being wasted and passing out was so normal even if they had sex with someone and didn't remember who it was, I thought that reflected on actual issues in the real world. Truth is, teens do sneak off or go with their parents approval to parties, drink a lot, and do end up in situations like that where they simply brush it off. And while I hated how all the characters did was drink, party, drink, hookup, drink, it was somewhat realistic. Even though I was never like that as a teenager, there are kids who really do that. Watch the news. There are realistic elements within this story, no matter how off it mostly was for me.

Posted by Shane @ItchingforBooks at 9:24 AM