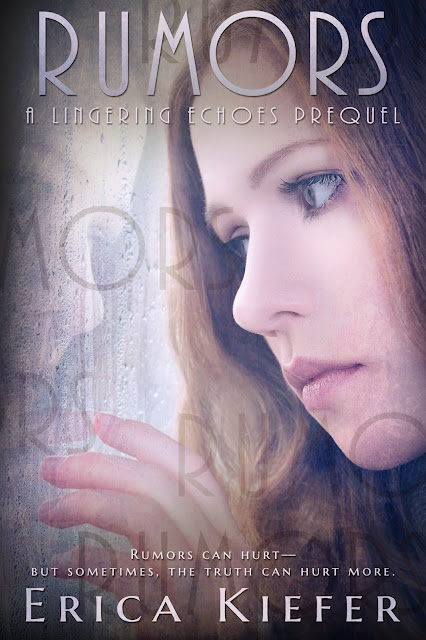 Seventeen-year-old Allie Collins would rather hide behind rumors than face the truth—her life will never be the same as it was before the accident. As a star athlete grieving in the shadows, she hopes to find normalcy in boys and basketball. When her best friend sets her up with the popular Shane Moretti, Allie drags her feet, reluctant for added complications. Then she decides that dating Shane would be the perfect shield from last summer’s tragedy. However, what starts as a mere distraction proves much more complex. As Shane leads Allie into questionable situations, gossip continues to swirl.

Battling for her own identity while barricading painful emotions, Allie won’t escape her senior year without new wounds. After all, tragedy is no stranger to her. The events that unfold will draw readers deep into a well of emotion in Rumors, a Lingering Echoes Prequel.

I liked this story. It was fast-paced, well-written, intriguing, and very relatable. Here we have this teen girl who's coping with the death of her cousin. Throughout the story you're given the sense of the guilt Allie feels. At first I thought it was going to be too depressing and overwhelming to read, but I was kept interested from start to finish. I'm glad I read Rumors before picking up Lingering Echoes because the prequel gives a clear understanding of what happened and it transitions into the next book with Allie trying to deal with the tragedy.

Character-wise, she was understandable, her behavior was justifiable, and in spite of closing off from everyone and holding on to so much pain, Allie was a likable character to me. I might not have experienced such an event, much less know what she's going through, but I know other people have and they can definitely attest to the fact that Rumors is quite a realistic novel.

I hated how her so-called friends wanted her to snap back into her old ways (sports, hanging out, etc.) Like, how could they not understand that she was dealing with a lot? I was kind of happy when that falling out happened and she stepped away from something she used to be so passionate about. Like her teacher said, you can't go back to your previous life, you have to learn to move on, even if it means changing certain things. It's so sad what happened to him just as someone was getting through to Allie, but I'm glad she took his words into consideration and in a way started to work on the pain.

Aside from what's going on with Allie, I liked how she got to experience a bit of dating, no matter how that turned out. Shane was a nice enough guy, just needed to shake off some people in his crowd, I guess. I also enjoyed the mom's character along with her sisters. I'm glad the author brought us into Allie's family life so we could see how they felt seeing her like that and how much they wanted to help. The mom is one tough cookie. I like her.

Again, it was a great story with a very interesting plot. The feels are definitely there, in my opinion. I suggest giving this one a read before starting Lingering Echoes, and if you've already read that one, then still come back to Rumors because it clarifies some things and provides an understanding of why Allie is so detached. I highly recommend this one.