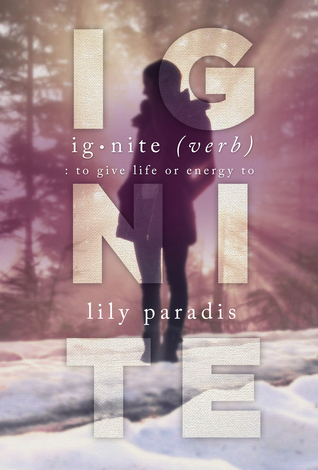 
After her father’s untimely demise in a mining accident and her mother’s abandonment, Lauren Lindsay is no stranger to loss. She’s used to living life for one person: herself. That is, until another family tragedy thrusts three children into her care and uproots her life in ways she could never imagine.

Lauren's first instinct is to run, until she meets their striking, mysterious neighbor Dean Powell. Their immediate chemistry and his connection with her late father just might be enough to keep her in town long enough to uncover pieces of her past that she never had answers to. Dean’s shady past and her reluctance to trust him could cost her the life she's always been searching for, but will she run back to her old life?

Or will she choose to stay and live the life her father always imagined for her?

I liked this story. The characters were interesting. The situation was unusual, but that makes it intriguing because things like that do happen. Ignite is definitely a solid debut by a wonderful author, and from here on one can only expect greater to come.

The best part about the story was getting to know Lauren, and seeing how she coped with being thrown into a position where she had to take care of her father's stepchildren. I mean, she didn't even have a relationship with their mother so I was really nervous for her. But as the story progressed I developed a sense of the kind of person Lauren was. She has a good heart, she gets flustered and confused, unsure of herself and what her next step should be, and even though she's been through a lot herself (being neglected by her mother and losing her father), she made the decision to set aside her own issues to help these kids. I liked how clumsy and flawed she was. That's rare to find in books.

Lauren's attraction to Dean was only natural, since they had met before and he was a swoon worthy guy. Not to mention they had an invisible bond between them that stemmed from a shared sense of loss and pain. So of course their relationship would bloom in such a fast and intense way, and I enjoyed the angst and longing on both sides. I look forward to getting to know a lot more about Dean in the follow-up, Arclight.

I don't know how to express my thoughts on Ignite without spoiling this book, really. I found several scenes funny, emotional, and relatable. The characters were all interesting in their own way, especially the kids. Emma was cute, and I liked the twist towards the end (though I suspected it more). Everyone worked out nicely. It's a good story that's nothing like a lot of the borderline erotic NA's that are being released, so don't steer away from this one because of the genre it falls in. It's something anyone can read and enjoy and I do recommend you give Ignite a try. Can't wait for the sequel.

About the Author
Lily is 22 and recently graduated from the University of Colorado where she earned a degree in English Literature. She lives with her family and loves reading, running, and hiking. Although she’s a Colorado native, New York City is her favorite place in the world and fosters her borderline unhealthy obsession with the Empire State Building and F. Scott Fitzgerald. IGNITE is her debut novel.