Review: This Side of Home by Renée Watson 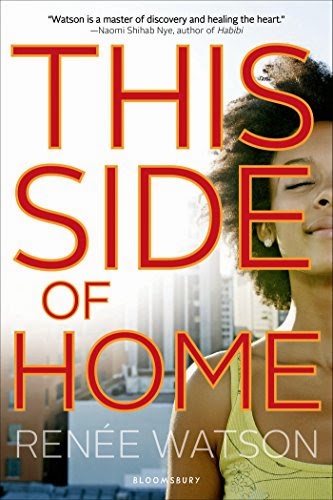 Identical twins Nikki and Maya have been on the same page for everything—friends, school, boys and starting off their adult lives at a historically African-American college. But as their neighborhood goes from rough-and-tumble to up-and-coming, suddenly filled with pretty coffee shops and boutiques, Nikki is thrilled while Maya feels like their home is slipping away. Suddenly, the sisters who had always shared everything must confront their dissenting feelings on the importance of their ethnic and cultural identities and, in the process, learn to separate themselves from the long shadow of their identity as twins.

In her inspired YA debut, Renée Watson explores the experience of young African-American women navigating the traditions and expectations of their culture.

*Publisher approved me via Netgalley

It's been a while since I've read a book so peppered in culture and the highs and lows of racial differences, but I must say I truly liked this story for all it stood for and the way in which it was written.

This Side of Home tells the story of Maya, and the tight bond she has with her twin sister, Nikki, and her best friend Essence. It's also about coping with changes, to oneself and to everything around you. Her whole life, Maya had everything mapped out, so it was understandable that she'd feel frustrated a bit by the fact that sometimes things don't always work out the way you planned. Aside from what was happening with her and her heart, Maya was also apprehensive about the changes taking place around her neighborhood. Her community was becoming more and more diverse but she felt it wasn't for the better, because there were still issues not being looked on.

At first, Maya's character comes off a tad close-minded, and one might not warm up to her beliefs or some of the things she'd say. But then I remembered that there are plenty of people like Maya, including me, that want to celebrate culture and fight for it as much as we can. The only thing was, she wasn't all the way right at times. And I'm happy that Tony came into her life and made her see that change was okay. That it's alright to step out of the box and look at things in a new light.

Once again, the writing was good--Easy and fast-paced. The descriptions were great too. I envisioned myself in the urban feel of the community and could experience the emotions of each character. My only issue was that I wanted to know who was the culprit behind the defacing of posters, and I wished that the principal would have somehow changed his views. But, you can't always get what you want. Regardless, it was a really good story and I recommend giving it a try if you'd like something more realistic and multicultural.

About the Author
Renée Watson is the author of the children’s picture book, A Place Where Hurricanes Happen (Random House, June 2010), which was featured on NBC Nightly News with Brian Williams. Her middle grade novel, What Momma Left Me debuted as the New Voice for 2010 in middle grade fiction by The Independent Children's Booksellers Association.

When Renée isn't writing and performing, she is teaching. She has worked in public schools and community organizations as an artist in residence for several years, teaching poetry, fiction, and theater in Oregon, Louisiana, and New York City. She also facilitates professional development workshops for teachers and artists.

One of Renée’s passions is using the arts to help youth cope with trauma. She has facilitated poetry and theatre workshops with young girls coping with sexual and physical abuse, children who have witnessed violence, children coping with the aftermath of Hurricane Katrina, and children who relocated to New York City after the 2010 earthquake in Haiti. Renée graduated from The New School, where she studied Creative Writing and earned a certificate in Drama Therapy.

Posted by Shane @ItchingforBooks at 10:22 AM