Review: Smash Into You by Sherry Soule 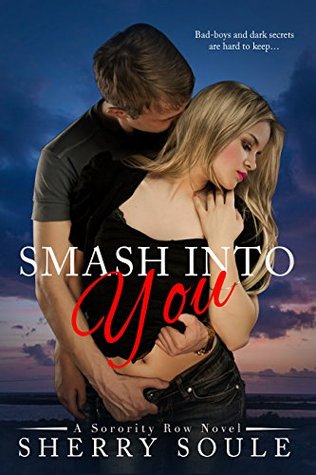 Bad-Boys and Dark Secrets Are Tough To Keep

Serena DuPont isn’t interested in falling in love again. Been there, donethat, and she has the pulverized heart to prove it. Leaving behind those sucky romantic choices, she transfers to a new college her sophomore year. All Serena wants to do is pledge a sorority, stay focused on her classes, and swear off sexy players.

Tell that to Cole Prescott, the incredibly gorgeous complication that threatens to crush her newfound resolve. Keeping him in the “friend zone” won’t be easy, especially when the sizzling chemistry between them is so damn combustible. But that’s not Serena’s biggest problem...

While pledging Zeta Beta, her life gets flipped horribly upside down by a series of ominous threats, nasty rumors, and even blackmail. And the only place she finds comfort is in the arms of the off-limits frat boy she should be avoiding.

Unless Serena can prove her innocence to the ultra-saucy sorority that’s accused her of being involved in a lewd sex scandal, Serena is at risk of losing the future she’s fought so hard to rebuild. Resigned to the fate of the Greek gods, Serena might not be able to lie her way out of this epic disaster.

*Received ebook from the author in exchange for an honest review.

Smash Into You was a very...interesting story. Though I feel interesting is not quite the word for it. I definitely enjoyed the plot, the characters, and the setting. There was never a dull moment. And I'm really curious about the next book and the direction in which Sherry will take Cole and Serena.

Lets talk characters. Serena isn't your fluffy, cute, innocent and perfect main character as portrayed in many books. She has secrets, and is without a doubt the definition of a liar. My gosh. I can't even begin to count the amount of times she fabricated stories to cover up what happened in her past. I found her quite hilarious though. She wasn't a blah main character, and her lies only made me more curious about her situation. There were times I'd cringed because I didn't see the big deal in wanting to pledge with that shady sorority, much less have any desire to be their friends, but once things started to unravel and I got to know her more, I understood why Serena was so determined on proving her worth.

Cole's quite the hottie and the usual player with a sweet side. I liked how his relationship with Serena grew over time, and the fact that they started out as friends was really good. It convinced me more about their true feelings and once the intensity ignited, I was all in. I felt like their emotions were true and not just thrown in the book for filler. However, I didn't think that one particular scene where things got ugly was necessary. It turned me off a tad. But then I remembered it was college and these characters were new adults. Not perfect. Still learning.

Aside from Serena's struggles to open up and feel like she belonged, there were other interesting aspects of the story. I didn't expect the addition of suspense and trying to figure out who was trying to sabotage Serena's college and love life. And even though as the story progressed I realized just who the culprit was, it still didn't bother me. The story was intriguing enough to keep going because I wanted to know what happened to Serena to make her the way she was now, and I liked her with Cole so much that I rooted for them, and hoped for a happy ending.

Overall, Smash Into You is a great new adult contemporary read with an exciting college setting, fluid writing, laced with drama, some sweet moments, and an unexpected mystery I didn't see coming. I enjoyed this one and can't wait for the next. Good job, Sherry!

Sherry Soule is an Amazon bestselling author and lives with her family and one very spoiled black cat in the San Francisco Bay Area. She's always wanted to live in a world where sweatpants are sexy, cupcakes don't make you fat, and she could adopt every homeless animal.

Many of her books have spent time on the 100 Kindle bestseller lists and have been nominated as Top Picks in the "Best Paranormal Romance" categories.

When she's not writing thrilling tales of romance and suspense, often mingled with a dash of the mystical and a splash of trendy fashion, you can find her watching Netflix, reading on her Kindle (often crushing on fictional characters), or hanging with her zany family.