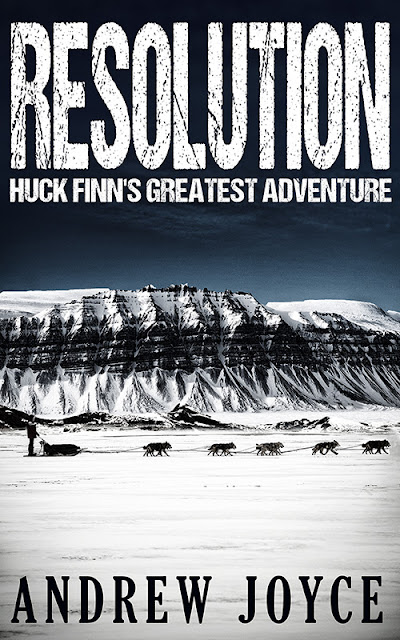 It is 1896 in the Yukon Territory, Canada. The largest gold strike in the annals of human history has just been made; however, word of the discovery will not reach the outside world for another year.

By happenstance, a fifty-nine-year-old Huck Finn and his lady friend, Molly Lee, are on hand, but they are not interested in gold. They have come to that neck of the woods seeking adventure.

Someone should have warned them, “Be careful what you wish for.”
When disaster strikes, they volunteer to save the day by making an arduous six hundred mile journey by dog sled in the depths of a Yukon winter. They race against time, nature, and man. With the temperature hovering around seventy degrees below zero, they must fight every day if they are to live to see the next.

On the frozen trail, they are put upon by murderers, hungry wolves, and hostile Indians, but those adversaries have nothing over the weather. At seventy below, your spit freezes a foot from your face. Your cheeks burn—your skin turns purple and black as it dies from the cold. You are in constant danger of losing fingers and toes to frostbite.

It is into this world that Huck and Molly race.

They cannot stop. They cannot turn back. They can only go on. Lives hang in the balance—including theirs.

My name is Andrew Joyce and I write books for a living. Shane has been kind enough to allow me a little space on her blog to promote my new novel RESOLUTION: Huck Finn’s Greatest Adventure. I think it’s a good book, but what do I know?

I’m kinda shy about tooting my own horn. So I think I’ll tell you a little story instead—a story about Chuck the Wonder Dog. Everything in it is true. I hope you enjoy it.

Chuck rooms with my friend Jeff. Now Jeff is a good enough guy, but we have different outlooks on dogs. Jeff thinks dogs should be well trained while I take a more lackadaisical approach to dog training. Actually, after ten years of being with my dog, Danny, I’m pretty well trained. Anyway, when Chuck and Jeff first got together, Chuck was just a puppy and Jeff started right in on the training. Once the basics were covered, he began teaching Chuck to count. Yeah I know, but Jeff is a boat captain and he has plenty of time on his hands when he’s not at sea.

The way he did it was to hold up one finger and get Chuck to bark once. When Chuck got the one finger-one bark down, Jeff went to two fingers and so on until Chuck would bark ten times when Jeff held up ten fingers. And, unless Jeff was going to take off his shoes—and even Jeff ain't that anal—that was as high as Chuck could count.

So now, Chuck will bark the requisite number of times for the number of fingers held before him. Eight, six, four or whatever, got the picture? Then Jeff started in on teaching Chuck how to add, subtract, multiply and divide. No fooling! I don’t know how he did it; I think all the credit should go to Chuck for being so smart. But in the end, Jeff could hold up, for instance, two fingers and say, “Two plus three,” then hold up three fingers and Chuck would bark five times. Or Jeff would show Chuck seven fingers and say, “Seven minus three.” then hold up three fingers and Chuck would bark four times. You see, Chuck had been taught to recognize the words “minus,” “add,” and so forth. He could do any combination of numbers up to ten.

Now we come to the kicker. As I said, Jeff is a boat captain and he hangs around the docks with the other captains. And if you know anything about boat captains, you know they are a languid breed. So while these lay-abouts hung out at the local bar, Jeff would entertain them with Chuck’s math skills. They were all duly impressed—all, that is, except one guy.

One fine day this guy sees Jeff on the dock and goes up to him and says “I’ll bet you I can give Chuck a math problem that he can’t figure out.” And Jeff replies, “As long as it doesn’t involve a number higher that ten, Chuck can handle it.” Consequently they bet a case of beer.

Now picture this: The guy is down on one knee facing Chuck. Jeff is standing behind the guy. The guy looks right at Chuck and says, “What is the square root of nine?” Chuck looks up over the guy’s shoulder at Jeff and Jeff holds up three fingers. Of course, Chuck barks three times. The guy turns around real quick, but not quickly enough. Jeff is standing there with his hands in his pockets, looking innocent. The guy scratched his head and headed out to buy a case of beer.

Like I said above, it’s a true story. I have seen Chuck in action. It’s amazing!

Oh yeah, I almost forgot—please go out and buy my book and make an old man happy. 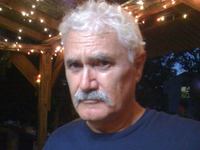 Andrew Joyce left high school at seventeen to hitchhike throughout the US, Canada, and Mexico. He wouldn’t return from his journey until decades later when he decided to become a writer. Joyce has written four books, including a two-volume collection of one hundred and forty short stories comprised of his hitching adventures called BEDTIME STORIES FOR GROWN-UPS (as yet unpublished), and his latest novel, RESOLUTION. He now lives aboard a boat in Fort Lauderdale, Florida, with his dog, Danny, where he is busy working on his next book, YELLOW HAIR.
www.andrewjoyce76.com | twitter.com/huckfinn76