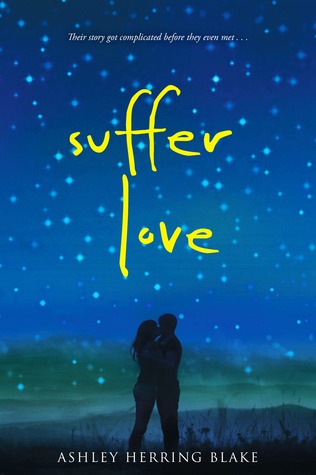 That’s what everyone keeps telling Hadley St. Clair after she learns that her father cheated on her mother. But Hadley doesn’t want to let it go. She wants to be angry and she wants everyone in her life—her dad most of all—to leave her alone.

Sam Bennett and his family have had their share of drama too. Still reeling from a move to a new town and his parents’ recent divorce, Sam is hoping that he can coast through senior year and then move on to hassle-free, parent-free life in college. He isn’t looking for a relationship…that is, until he sees Hadley for the first time.

Hadley and Sam’s connection is undeniable, but Sam has a secret that could ruin everything. Should he follow his heart or tell the truth?

*Publisher approved request on Netgalley in exchange for an honest review.

I had featured Suffer Love a few weeks ago as a way to depict my excitement for its release. After reading the blurb, I became intrigued and wanted to understand what had happened to these characters and the state of their families. Ashley did not disappoint; from fluid and superb writing, to a story that is both relatable and likable, Suffer Love turned out to be just what I was looking for.

You might say "what a small world", with the way these characters ended up living in the same town. Both families are connected in a not so flattering way, and it may seem too coincidental to some that Hadley and Sam ended up falling for each other, but I felt like these things happen in real life and it didn't seem too far-fetched to me.

I actually liked Hadley and Sam being together in spite of the situation. I always say you can't pick who to love, it just happens. And they were both dealing with the aftermath of adultery and had developed trust issues, but the fact that they were still capable of developing such strong feelings for each other was rather sweet and admirable, in my opinion. And I liked that their love had somewhat healed their hearts.

In regards to the characters, I loved Sam. Didn't like that he behaved in that way to distract himself, of that he kept that significant detail from Hadley, but I understood his intentions and how protective he was of his little sister. He was a smart guy with a lot of hurt, and I wanted to shake his mom for not being there for him after what she put her family through.
As for Hadley, I felt a little detached from her and wasn't a fan of how she'd act in various situations. Like she'd behave as if she was the only one in pain or dealt a horrible hand in life, when other people were suffering too. Some of the things she'd say turned me off at times too. But honestly, throughout the story, I grew more of a understanding of her character and why she was the way she was.

Ajay and Livy were also great additions to the story. Ajay, Sam's best friend, was a breath of fresh air and humor relief when things got too serious. As for the parents, I would have liked to learn more about Sam's mom and Hadley's father, the two people who caused the issues to begin with. The story started with life after the cheating came to light, but I would have still liked to know about the parents and why or how they ended up in that predicament.

Again, Suffer Love is an intriguing novel with interesting characters coping in a sad but realistic situation. Ashley is a great writer and she delivered a really good debut. I'm definitely a fan now, and I cannot wait to read her next release.

About the Author
Ashley Herring Blake is a poet, teacher, and YA novelist. Her debut novel, SUFFER LOVE, follows two teens as they attempt to wade through an intense relationship complicated by their parents' infidelities. Ashley lives in Nashville, TN.

Posted by Shane @ItchingforBooks at 2:03 PM