Guest Post & Giveaway: Ethel Rohan on The Weight of Him

Award-winning short story writer Ethel Rohan has released her debut novel, The Weight of Him, which is described as the perfect feel-good novel to curl up with this winter. And I'm excited to have her on the blog sharing what inspired her to write this story. Check out the guest post and enter to win a copy of the book! 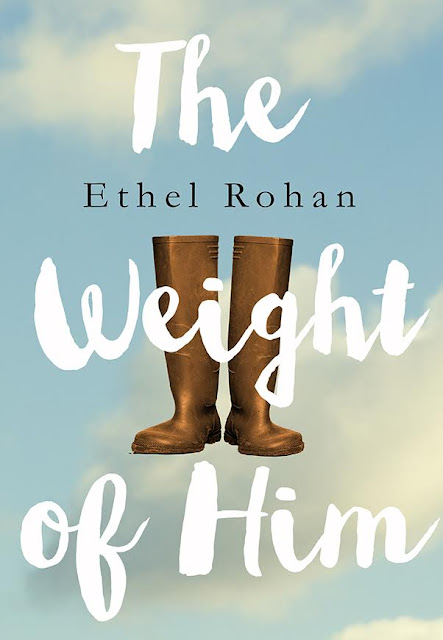 In The Weight of Him Billy Brennan undergoes an unforgettable journey in a startling attempt to resurrect his family and reignite hearts, his own most of all.

At four hundred pounds, Billy can always count on food. From his earliest memories, he has loved food's colors, textures and tastes. The way flavors go off in his mouth. How food keeps his mind still and his bad feelings quiet. Food has always made everything better, until the day Billy's beloved son Michael takes his own life.

Billy determines to make a difference in Michael's memory and undertakes a public weight-loss campaign, to raise money for suicide prevention--his first step in an ambitious plan to save himself, and to save others. However, Billy's dramatic crusade appalls his family, who want to simply try to go on, quietly, privately.

Despite his crushing detractors, Billy gains welcome allies: his community-at-large; a co-worker who lost his father to suicide; a filmmaker with his own dubious agenda; and a secret, miniature kingdom that Billy populates with the sub-quality dolls and soldiers he saves from disposal at the toy factory where he works. But it is only if Billy can confront the truth of the suffering and brokenness within and around him that he and others will be able to realize the recovery they need.

Told against the picturesque yet haunting backdrop of rural, contemporary Ireland, The Weight of Him is a big-hearted novel about loss and reliance that moves from tragedy to recrimination to what can be achieved when we take the stand of our lives.

The meaning behind The Weight of Him, and why it is a "call for love"?

While the characters and events in my first novel, The Weight of Him, are fictional, the story’s themes are rooted in reality and have deep personal meaning. For one, some of my earliest memories are around suicide.
When I was a girl, my mentally ill mother repeatedly threatened to kill herself. Every time she left the house I went into a panic, terrified she would end herself and never return. At night I lay awake on my bed, stiff and sweating, listening for sounds from downstairs, her bedroom, the bathroom—frantic that she might attempt to follow through on her threats.
As an adult, I’ve had my own struggles with anxiety and depression, and suicidal thoughts. I lost a dear friend to suicide, distant family members, several in my community, and many more in wider circles. Mental illness, and suicide in particular, is a disease that plagues all too many. Suicide is the number one killer of young men in Ireland, my birthplace, and is also a global epidemic. On average, in the US, there are 121 suicides every day. That’s 121 too many.
In my own journey to recovery, I found the root of my anguish lay in a lack of self-love and a sense of hopelessness—torment that’s common amongst the suicidal. It became impossible to believe that I could ever feel better about myself, and my life. My return to well-being started with gratitude. I began every day giving thanks. Even at my most wretched, with intention, I could always find something for which to be thankful—food, warmth, home, my daughters, my husband, another lifesaving breath. The more gratitude I expressed, the better I began to feel. Slowly. Surely.
My healing deepened with forgiveness—forgiving others and myself for wrongs both real and imagined. I did not find peace(ish), though, until I learned to love myself unconditionally. And getting to that point proved to be long, hard, painful work. I loved my children (and my cat and dog!) without reservation, but I had little empathy or compassion for myself. With counseling, instead of hating on myself, I started to treat myself as lovingly as I did my family and friends (and, yes, my cat and dog). I got to a once unthinkable place: I came to love myself. It’s heartbreaking how many of us cannot declare that with our whole heart: I love me.
That is my rally cry in my novel: Love yourself. Love others. It’s the only way we will survive.

Her work has appeared in The New York Times, World Literature Today, GUERNICA Magazine, Tin House Online,The Rumpus, and many more. Born and raised in Ireland, she lives in San Francisco.

*Thanks to the publisher for contributing a copy of the book