Review: Between the Devil and the Duke by Kelly Bowen 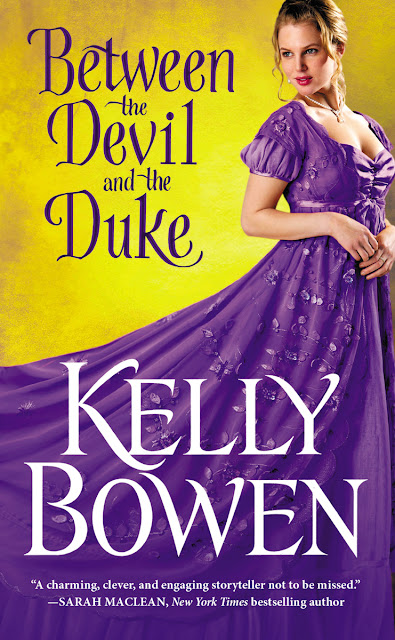 Their love was always in the cards.
He should have thrown her out. But when club owner Alexander Lavoie catches a mysterious blonde counting cards at his vingt-et-un table, he's more intrigued than angry. He has to see more of this beauty—in his club, in his office, in his bed. But first he'll have to devise a proposition she can't turn down.

Gossip said he was an assassin.
Common sense told her to stay away. But Angelique Archer was desperate, and Lavoie's club offered a surefire way to make quick money—until she got caught. Instead of throwing her out though, the devil offers her a deal: come work for him. Refusing him means facing starvation, but with a man so sinfully handsome and fiercely protective, keeping things professional might prove impossible.

*Publisher provided eARC via Netgalley in exchange for an honest review.

I love Historical Romance and have been wanting to read more books in that genre, so you can imagine my excitement when Between the Devil and the Duke landed on my kindle.
I was looking forward to traveling into the past and reading about the ways of society in that time period. And at start, I was beyond intrigued with this story.

Angelique's character drew me in instantly. I needed to know why she was often in Alexander's casino at a vingt-et-un table (which by the way I had to look up to figure out meant blackjack), and what was up with her family. When those things were brought to light, I was happy that Alexander genuinely wanted to help her in any way he could. I mean, Angelique was a strong and fierce woman, and she had to be, with a terrible excuse of a brother that never got himself together for his family. So it was nice that she could allow herself to be vulnerable at times and just allow a man like Alexander to take care of things.

In regards to Alexander, I never quite got his story, only bits and pieces here and there because of how much he kept inside. He spoke about a particular painful thing that happened in his life and how it affected him. Yet, I think there was still more to learn. Although, I did enjoy the air of mystery.

It seemed the story would be about these two characters working together at the gambling hell, with Angelique putting her awesome skill to use and Alexander admiring her every step of the way. I had no idea that whole bit with the brother and the twist with Angelique's family would come into play. While I liked the addition of suspense, which was mostly about finding the real culprit and discovering why they were out to ruin Angelique's family, that part of the story seemed a tad drawn out and there were moments that I got confused about names and things mentioned. That aside, it was an interesting novel with nice writing and sexy scenes that'll ease any prolonged tension. I also like that even though this is the third book in the series, you don't have to read them in order and there are different characters to fall in love with in the two previous books.

Kelly Bowen grew up in Manitoba, Canada. She worked her way through her teenage years as a back country trail guide and ranch hand. She attended the University of Manitoba and earned a Master of Science degree in veterinary physiology and endocrinology.

But it was Kelly's infatuation with history and a weakness for a good love story that led her down the path of historical romance. When she is not writing, she seizes every opportunity to explore ruins and battlefields.

Currently, Kelly lives in Winnipeg with her husband and two boys, all of whom are wonderfully patient with the writing process. Except, that is, when they need a goalie for street hockey.