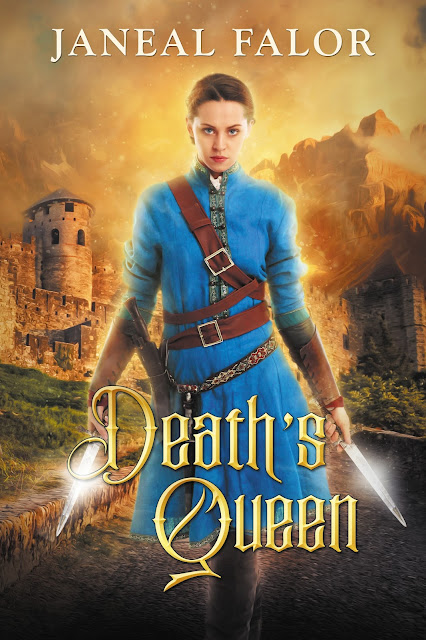 
An assassin without a name, born to kill. Owned by a vicious man who refuses to call her anything but girl, she is forced to commit atrocious acts of violence. Vowing to take her future into her own hands, the seventeen-year-old decides to risk everything on one act of defiance—drinking from The Death Drink. The beverage kills most whose lips touch it—only allowing those who are destined to be royalty survive the first sip.

To the astonishment of the nation of Valcora, she imbibes it and lives, which crowns her queen. Thrown into a life of royal intrigue, she now has a purpose—to rule with the fairness she was never shown. Despite her altruistic plans, it becomes apparent that someone wants her dead. The new queen must use her training from the former life she only wants to forget in order to stay alive long enough to turn her kingdom into something she can be proud of. She’ll hold onto the crown… or die trying.

One taste—that's all that's between me and death.
Failing to become queen now means I’ll never fail again. Which is what I want. It gives me some comfort, albeit the coldest kind. The crowd around me watches eagerly, hungry for my death, yet hoping for my life. Hoping for the next Queen. There are many of them in the grand hall of the palace. Enough to almost fill the entire room. Despite their number, those gathered are silent. Everyone's waiting to see what happens.
They’ve been without a queen since the last one died a month ago. She reigned for almost five years, and her death was a mysterious one to the general public. The palace hasn't released a reason for it.
Typical. Queens' lives are often threatened by one force or another. Another reason not to become a royal, though I don’t need more.
My choice is to die.
The anticipation of having a new, long overdue ruler doesn't diminish the crowd's excitement. The prospect is not nearly as entertaining as that of my agonizing death—the slow, torturous kind.
Why am I picking this again?
Right—because even a slow, torturous death is better than letting Daros have me. Better than living life as a ghost, alone and cold.
For a few long moments, the world cares about what I'm doing, and then it will be over. I'll have gone out trying to fulfill a duty all females have been asked to do but few try, because of the fear of death. We are free to choose whether to drink or not, despite being asked.
If I had a name, it’d soon be etched into the stone pillar holding the chalice of death or I could be given full control over a country. Things have been like this as far into history as I know. When one queen dies, another is found through the Mortum Tura, to take her place. Many die, but one lives and becomes our new ruler.
And now it's my turn for one or the other.
Either way, I will be remembered.
“It's time,” Ranen says, the tassel of his hat swinging in rhythm with his irritation. Past time, he means. He doesn't want me to try; urchins off the street shouldn't dirty the chalice with their touch. They shouldn't try for the Mortum Tura. Of course, he has no choice but to let me. All unmarried women have the choice—even dirty ones.
In my defense, I would have cleaned myself, had I realized what I was doing.
I grasp the pewter stem. This is for the best. I'm done with life, and there's no better way to go out, despite the fact it’s painful.
Only thing is I'm having second thoughts. Not about death, but about torture. How bad is it going to hurt? I'm used to pain, but there are quick, painless ways to die. I know many. Why'd I have to pick this one?
They say the last girl to try to become Queen screamed for a full day before she finally gave in to the next life.
It’s not exactly the end I have planned for myself, but I should have thought of that before I came before this crowd. I won't be a coward and back out now.
Death, I'm coming.

About the Author
Amazon best selling author Janeal Falor lives in Utah with her husband and three children. In her non-writing time she teaches her kids to make silly faces, cooks whatever strikes her fancy, and attempts to cultivate a garden even when half the things she plants die. When it's time for a break she can be found taking a scenic drive with her family or drinking hot chocolate.