Review: How To Be Alone by Tanya Davis 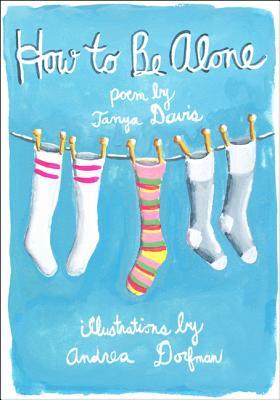 
If you are at first lonely, be patient.

From a solitary walk in the woods to sitting unaccompanied on a city park bench to eating a meal and even dancing alone, certain activities can feel strange when you're on your own. We rarely treasure those moments, even though there are abundant possibilities and delights waiting to be discovered when we have the time to just be with ourselves. Tanya Davis's words and Andrea Dorfman's beautiful illustrations soothe the disquiet that accompanies this fear of aloneness, and celebrate the power of solitude to change our views of ourselves and the world. How to Be Alone reveals how, removed from the noise and distractions of other lives, we can find acceptance and grace within.

For those who have never been by themselves, or for those who relish being on their own, this moving work encourages us to recognize and embrace the possibilities of being alone—and reminds us of a universe of joy, peace, and discovery waiting to unfold.

*A copy of the book was provided by the publisher.

Oh my gosh. I don't even know where to start. How to Be Alone gave me all sorts of tingles inside. First off, I'm saddened to only now hear about this poem after seeing so many rave about it and its creator. Tanya Davis and Andrea Dorfman are both truly talented. These two ladies have respectively invoked so much emotion through words and illustrations. I felt so unbelievably moved by imagery that might be deemed as simple art yet it was so interesting in its own way. The illustrations definitely complimented the words in a way I can't even describe.

First off, I'm an introvert and often spend a lot of time by myself. A lot of people I know may worry and say I'm isolating myself from developing connections and not being more involved in a community but Tanya Davis is reminding us with her truthful words that there's nothing wrong with being alone sometimes and experiencing life by ourselves. I can attest to the fact that I have fun doing a lot of things alone and I don't feel depress doing it without any company. It's part of life. But she's also saying to be patient if being alone brings on loneliness and you're in need of some company.

Here's how I relate to this poem...
My level of interest in various things don't always match with a friend or whoever but I don't let it bother me too much because we all like different things. Each of us are unique in our own way and have unique personalities. I really liked how this short but sweet poem, film and illustrations emphasized that throughout. It's also a great representation of the fact that you shouldn't spend your time worrying too much. Live your life and appreciate each day you're given.

I also liked that in the end, she did mention how sometimes you might end up coming across someone while you're basking in a moment alone. If you're one to fret over finding a companion and the likes, then by all means go out to different places, you never know. But always remember, just because you're alone, doesn't mean there's something wrong with you and its not the end of the world if you are. Take the advice of this poem and try some of those things. Like I said, you never know.

Tanya Davis has been performing as a poet since 2000, shortly after stumbling upon (two of her favorite) poets (to this day) Shane Koyczan and Kinnie Starr at a cabaret show in Vancouver's vibrant Downtown Eastside. Previous to that summer evening, in an art space by the name of Church of Pointless Hysteria, Tanya had not even known that spoken word poetry existed as an art form. She was floored. She wrote her first piece a few weeks later and, with the prompting of friends, recited it at an open mic on commercial drive.
Tanya is currently working on a manuscript for her poetry, as well as collaborations in video, sound, and music.