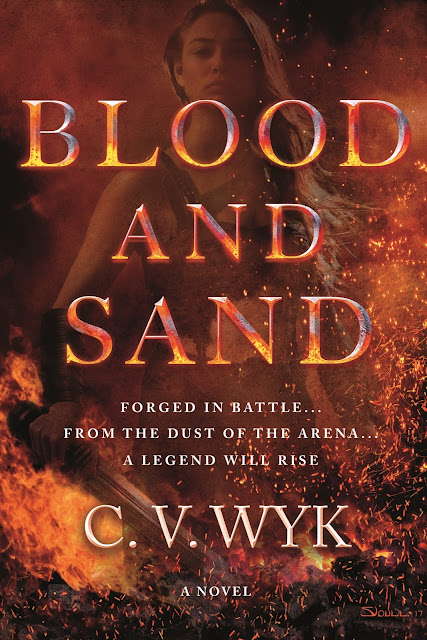 FORGED IN BATTLE...
FROM THE DUST OF THE ARENA...
A LEGEND WILL RISE

The action-packed tale of a 17-year-old warrior princess and a handsome gladiator who dared to take on the Roman Republic―and gave rise to the legend of Spartacus...

For teens who love strong female protagonists in their fantasy and historical fiction, Blood and Sand is a stirring, yet poignant tale of two slaves who dared take on an empire by talented debut author C. V. Wyk.

Roma Victrix. The Republic of Rome is on a relentless march to create an empire―an empire built on the backs of the conquered, brought back to Rome as slaves.

Attia was once destined to rule as the queen and swordmaiden of Thrace, the greatest warrior kingdom the world had seen since Sparta. Now she is a slave, given to Xanthus, the Champion of Rome, as a sign of his master’s favor. Enslaved as a child, Xanthus is the preeminent gladiator of his generation.

Against all odds, Attia and Xanthus form a tentative bond. A bond that will spark a rebellion. A rebellion that threatens to bring the Roman Republic to its end―and gives rise to the legend of Spartacus...

The story continues in Fire and Ash, coming in 2019 from Tor Teen.

*Received an ARC from the publisher in exchange for an honest review.

After spotting Blood and Sand on Goodreads, I knew I just had to read it. While I haven't watched or read anything regarding Spartacus or Gladiators before, I do love female protagonists that are strong and more than capable of saving themselves when it comes down to it. And in the case of warrior princess Attia, she had all this and more, plus she was able to become vulnerable and compassionate beyond the tough exterior.

I loved the two main characters from start. Both Attia and Xanthus had endured so much in their past and it made them real and even more interesting. It was also wonderful to see how much their adversity motivated them to rise to the top and face things head on and that more than anything else drew them closer and became a beautiful bond in the wake of all the chaos.

Romance aside, the overall setting and historical aspect of the story was magnificently executed and I applaud the author for her superb writing and the way in which she kept the novel so intriguing. From the fight scenes to the atmosphere outside of the arena, every moment was important and not once did the story feel dull or draggy. I enjoyed every bit of this thrilling tale and I cannot wait to read the second book.

Speaking of follow-ups, the ending really broke me and left me with questions, and I'm nervous about what will happen next for each surviving character. I'm looking forward to finding out where their paths will lead and if Attia and Xanthus will have a happy ending once the people responsible for their suffering falls.

In conclusion, Blood and Sand is quite a thrilling adventure that pulls you into the lives of two determined individuals fighting for love and justice in a time of brutality. I highly recommend reading this fantastic story.

C.V. Wyk is the author of BLOOD AND SAND, debuting from Tor Teen in winter 2018. Born and raised in Los Angeles, CA, Wyk now resides on the east coast along with a precocious mini poodle and demanding guinea pig.

Finished copies of the book will be provided by the publisher to 3 winners.