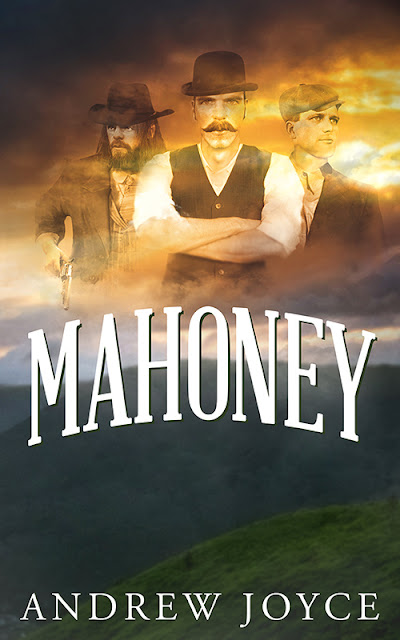 In this compelling, richly researched novel, author Andrew Joyce tells a story of determination and grit as the Mahoney clan fights to gain a foothold in America. From the first page to the last, fans of Edward Rutherfurd and W. Michael Gear will enjoy this riveting, historically accurate tale of adventure, endurance, and hope.

In the second year of an Gorta Mhór—the Great Famine—nineteen-year-old Devin Mahoney lies on the dirt floor of his small, dark cabin. He has not eaten in five days. His only hope of survival is to get to America, the land of milk and honey. After surviving disease and storms at sea that decimate crew and passengers alike, Devin’s ship limps into New York Harbor three days before Christmas, 1849. Thus starts an epic journey that will take him and his descendants through one hundred and fourteen years of American history, including the Civil War, the Wild West, and the Great Depression.

My name is Andrew Joyce and I write books for a living. Shane has been kind enough to allow me a little space on her blog to promote my new book, Mahoney. So I thought I might entertain you with a story about the publishing business.
My first book, Yellow Hair, was a 164,000-word historical novel. And in the publishing world, anything over 80,000 words for a first-time author is heresy. Or so I was told time and time again when I approached an agent for representation. After two years of research and writing and a year of trying to secure the services of an agent, I got angry. To be told that my efforts were meaningless was somewhat demoralizing, to say the least. I mean, those rejections were coming from people who had never even read my book.
“So you want an 80,000-word novel?” I said to no one in particular, unless you count my dog, because he was the only one around at the time. Consequently, I decided to show them City Slickers that I could write an 80,000-word novel!
I had just finished reading Mark Twain’s Huckleberry Finn for the third time, and I started thinking about what ever happened to those boys, Tom and Huck. They must have grown up, but then what? So I sat down at my computer and banged out Redemption: The Further Adventures of Huck Finn and Tom Sawyer in two months. I had them as adults in the Old West. Then I sent out query letters to literary agents.
A few weeks later, the chairman of one of the biggest agencies in the country emailed me. He loved the story and suggested a few changes. They were good suggestions, and I incorporated about 80% of them into the book. We signed a contract and it was off to the races, or so I thought. But then the real fun began: the serious editing. Seven months later, I gave birth to Huck and Tom as adults. And just for the record, the final word count was 79,914. The book went on to reach #1 status in its category on Amazon (twice) and won the Editor’s Choice Award for Best Western of 2013. The rest, as they say, is history.
But not quite.
Now we come to the crux of the matter. My readers really enjoyed the book. Reviewer after reviewer said they would love a sequel, but given how I ended the story, I could not envision that being possible. Then I started getting emails and phone calls from my agent, badgering me to continue the adventure. At first I ignored him. Finally, to stop the badgering, I started MOLLY LEE, a “sort of” sequel. It’s a stand-alone book, a parallel story, if you will. (Molly was a minor character in Redemption.)
Then, of course, I had to do a sequel to the sequel, hence RESOLUTION: Huck Finn’s Greatest Adventure.
After I got done with Huck, Tom, and Molly, I turned my attention to my first novel, the one I couldn’t sell to an agent. I whittled it down from 164,000 words to 132,000 and published it myself. And guess what? It won Book of the Year from one outfit and Best Historical Fiction of 2016 from another.
So, I reckon the moral of the story is: Stay true to your vision, but along the way, it’s all right to conform to the norms people try to place on you.


The reflected firelight flickered across awestruck faces and mirrored in the eyes of those who listened as stories were told of yesterday’s indignities and tomorrow’s aspirations. The look in those yearning eyes spoke of hopes and dreams. The laughter heard around the fire conveyed a sense that somehow it would all work out. For a few short hours, on Saturday nights, in the deep woods of a place none of them had ever heard of before, the constant fear that lived within their hearts was banished from their lives.

In time, they would prevail. Their sons and daughters would one day stand straight and tall as proud Americans, as proud as their fathers had been to be Irish.

Andrew Joyce left high school at seventeen to hitchhike throughout the US, Canada, and Mexico. He wouldn't return from his journey until years later when he decided to become a writer. Joyce has written five books. His first novel, Redemption: The Further Adventures of Huck Finn and Tom Sawyer, was awarded the Editors' Choice Award for Best Western of 2013. A subsequent novel, Yellow Hair, received the Book of the Year award from Just Reviews and Best Historical Fiction of 2016 from Colleen's Book Reviews.

Joyce now lives aboard a boat in Fort Lauderdale, Florida, with his dog, Danny, where he is busy working on his next book, tentatively entitled, Mahoney: An American Story.