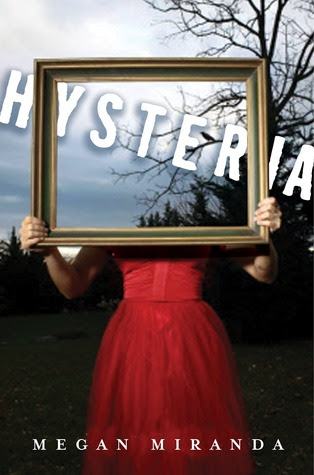 by Megan Miranda
Expected publication: February 5th 2013
Purchase: Amazon
Publisher: Walker Childrens
Synopsis via Goodreads:
Mallory killed her boyfriend, Brian. She can't remember the details of that night but everyone knows it was self-defense, so she isn't charged. But Mallory still feels Brian's presence in her life. Is it all in her head? Or is it something more? In desperate need of a fresh start, Mallory is sent to Monroe, a fancy prep school where no one knows her . . . or anything about her past.But the feeling follows her, as do her secrets. Then, one of her new classmates turns up dead. As suspicion falls on Mallory, she must find a way to remember the details of both deadly nights so she can prove her innocence-to herself and others.
In another riveting tale of life and death, Megan Miranda's masterful storytelling brings readers along for a ride to the edge of sanity and back again.

The moment I started reading and getting into the story I became intrigued. There was a tragedy, evidently. And I just had to find out what that tragedy was. It's not often that I pick up something outside of paranormal, so I was pretty much opened to trying another genre and putting some distance between myself and fantasy.


I truly enjoyed Hysteria in the beginning. Mallory appeared to be a young girl going through the effects of a terrible event and I desperately wanted to know what happened to her and the people involved (I strayed away from the description to keep myself puzzled. Simply because I find that my expectations soar once I've read the synopsis of any book), and I also wanted to know whether or not she was actually going crazy. I liked that I was unlocking the truth along with Mallory as she fought to put the pieces together and face the truth. Because indeed, the mystery was the driving force behind the story, and I loved how it stirred up a lot of emotions between the pages.


Everything seemed to be going really well; the writing was quick and grabbing, and I was filling my cup the more I read. It all seemed unbelievably perfect until after the middle of the book and nearing the end. That's when the element that kept my interest started to squander a bit. I found myself getting frustrated with the main character for some of the things she did that obviously weren't sensible based on what happened to her already. Just a few scenes where her behavior was mind boggling. Aside from that, she was acceptable. But a character that I truly loved was her best friend, Colleen. This girl is the definition of a wonderful friend, best friend to be exact. I was beyond impressed with her character in particular and I felt that throughout the entire story, Colleen was the one person I never felt annoyed with at any time.


I must say also the writing was well done. The story itself was great. But I thought that the final chapters and the conclusion to the mystery in particular wasn't as great as the chapters prior. Its almost like the thrill fizzled a bit, but not a lot because once again, I did enjoy the book.

Megan Miranda is a spectacular author and Hysteria is one of those stories that will have you thinking about it even after you finish reading it. Whether you loved it or not at all, Hysteria will definitely make an impact.

About the Author
Megan is a scientist - turned - teacher - turned - stay-at-home-mom - turned - writer. She is not nearly as indecisive as she sounds. She lives near Charlotte, North Carolina, where she volunteers as an MIT Educational Counselor, does the mom thing by day, and writes by night.
Her first novel, FRACTURE, was published in January 2012 by Walker/Bloomsbury. HYSTERIA, a YA psychological thriller, will be published in February 2013. VENGEANCE, a companion/sequel to FRACTURE, will follow in 2014.