Guest Post~Caela Carter (Me, Him, Them, and It)

Caela Carter, author of the new YA contemporary novel Me, Him, Them, and It, has stopped by IFB today with a guest post written in the POV of the main character's best friend. 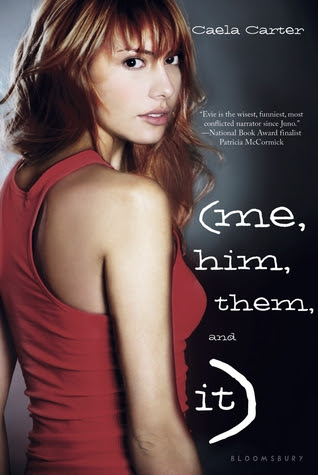 by Caela Carter
Released: February 26th 2013
Publisher: Bloomsbury U.S.A. Children's Books
Purchase: Amazon
Synopsis via Goodreads:
When Evelyn decided to piss off her parents with a bad reputation, she wasn't planning to ruin her valedictorian status. She also wasn't planning to fall for Todd-the guy she was just using for sex. And she definitely wasn't planning on getting pregnant. When Todd turns his back on her, Evelyn's not sure where to go. Can a distant mother, a cheating father, an angry best friend, and a (thankfully) loving aunt with adopted daughters of her own help Evelyn make the heart-wrenching decisions that follow? With the popularity of "Juno," "Teen Mom," and "The Secret Life of the American Teenager," this novel has a built-in audience. Gripping, heartfelt, and responsible, "Me, Him, Them, and It "is not to be missed!

“Ok, Lizzie, that’s enough,” Mom says. “Go do your homework.”
“It’s only the third day of school,” I protest. I put my granola bar down on the kitchen table, trying to buy some more time. Mom turns back to the sink and switches on the faucet.
In the living room behind us, the vacuum cleaner starts whirring so I have to shout so that she’ll hear me whine. Mom can never stand up to whining.
“Just tell me the next thing, what happens next.”
I see her shoulders go up and down which means she’s sighing, even though I can’t hear it because of the all the noise: the vacuum our right, and my sister’s cartoon blaring behind our heads, and the water rushing over my mother’s hands. It’s always so damn loud in this house.
“Lizzie,” she says. She turns around to face me and I sink in the wicker kitchen chair when she levels her blue eyes on mine. She’ll say she’s not in the mood, which really means she’s in a mood. But she says, “You’re a junior in high school now. Aren’t you a little too old to be asking me to tell you the same story over and over again?”
My cheeks turn pink, but I don’t bother to argue with her. If you ask me, I’m a junior in high school now and that means I’m old enough to know who my dad is. It’s really unfair. Everyone I know knows who their dad is. My sister knows who her dad is, even though he’s not around anymore. Evelyn knows who her dad is, even though she hates him. It’s so stupid that I’ve lived for sixteen years without this answer.
But, I know not to ask Mom directly about him anymore. She just shuts down. So, instead, I ask her, over and over again, to tell me the story of when I was born. She always lets a new little detail slip and eventually I’ll have enough minutia to put together into a clue that will solve my life-long mystery.
Mom comes to sit next to me. She puts her arm around my shoulder. She feels bad for making me turn all pink. Which is good. She should feel bad.
“Don’t you think I know what you’re doing, dear daughter?” she whispers into my ear. “You don’t really think I can be tricked that easily, do you?”
Crap. There goes my last resort.
“I’ll tell you. When I’m ready to tell you about him, I will,” she says. Something loosens in my shoulders. It feels like my heart raises an inch or two higher in my chest. She’ll tell me. Mom has never promised that before.
“Now go. Do your homework,” she demands.
Even though I’m hopeful, I arrange my face into a scowl and stomp up the stairs. She’ll tell me sooner if she thinks I’m angry with her.
She can’t hear the stomping though, because the house is always so loud. For good measure, I plunk my iPod into my speakers and turn up the volume before opening my million-paged reading text book. I spread out on the floor with the Canterbury Tales under my noes but it’s only a few seconds before the words spin and mush on the page.
I put my head down on the pink carpet and brush my hair off my neck so it spills across the pages. No one does homework in the first week of school anyway.
She said she’d tell me. She’ll tell me. I won’t have to figure it out. She’ll let me find him.
I can’t wait to tell Evelyn.
I savor that thought—telling my best friend about the biggest news of my life—in my skull and focus on it so clearly that I lose myself in there, in my brain. Until five fingers brushing the top of my head make me jump. I hadn’t heard anyone come in, of course, because of all the noise in this house.
I look up and there she is, Evelyn, in her school uniform with her own arms wrapped around her like she’s hugging herself. Her legs are like twigs sticking out of her skirt, her hair is sticking out of her pony-tale in every directions so like a red halo.
Her face is broken, the picture of pain.
I hope to my feet and wrap my arms around her bony shoulders. “Oh my God! What’s wrong?”
A million theories crash through my brain: her dad left again, her parents had another fight, they’re finally getting divorced. And because I can’t help it, Darn, I won’t be able to tell her my own news, yet again. Whenever her face is this broken, she doesn’t hear me anyway.
She shrugs me off without hugging me back. She’s always like that.
I stand back and look at her. Her eyes are big like she’s heard some shocking news. Her mouth is twisted to the side. Her freckles seem to be drooping off her face.
“Tell me. Now.” I insist.
She shakes hear head and clears her face. “Nothing’s wrong, Lizzie. God.”
Oh no. Not this again. No, no, no.

About the Author
Caela Carter was raised in Basking Ridge, NJ and Baltimore, MD. She's been writing since she learned how to pick up a pen but before the writing thing got serious she spent six years teaching English to middle and high school students in Jacksonville, FL and Chicago, IL. Her debut novel, ME, HIM, THEM AND IT will be published in 2013 by Bloomsbury. When she's not writing, Caela is a middle school librarian in Harlem, a Notre Dame football enthusiast, and a happy explorer in New York City.

Email ThisBlogThis!Share to TwitterShare to FacebookShare to Pinterest
Labels: Authors, Caela Carter, Contemporary, Guest posts, Me Him Them and It, Romance, Young Adult