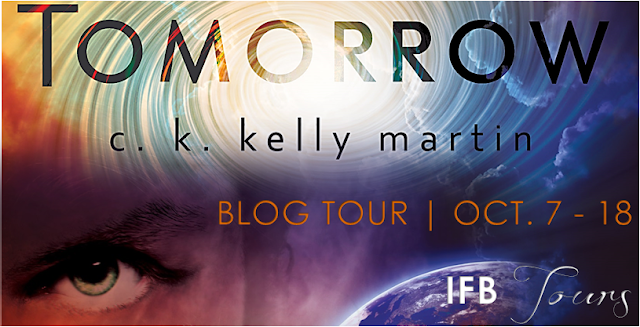 Young Adult-Science Fiction-Fantasy
*Tomorrow is the second book in the Yesterday series but can be read as standalone.

Synopsis via Goodreads:
The sci-fi adventure that began with Yesterday continues with a thriller that can also be read as a standalone.

2063, United North America: climate change has rendered great swathes of the country uninhabitable, the rise of robot workers has created mass unemployment, eco-terrorism is a constant threat and a 2059 nuclear exchange between Pakistan and India has torn large holes in the world's ozone layer and pushed humanity's existence towards a cliff.

Garren and Freya have managed to escape that nightmare world and lose themselves in 1986 Vancouver. But the future's reach is long, and they're no longer safe there. No one is. Shadowy forces are intent on influencing the past's path. And when Freya is taken, it's up to Garren to save both her, and the future.

C.K. Kelly Martin always thought she'd get around to writing in earnest eventually and began writing her first novel in a flat in Dublin, finishing it in a Toronto suburb. By then she'd discovered that young adult fiction felt the freshest and most exciting to her. You have most of your life to be an adult but you only grow up once!

Martin currently resides near Toronto with her Dub husband. She became an Irish citizen in 2001 and continues to visit Dublin often (although not as often as she'd like!) while working on teen novels.

Posted by Shane @ItchingforBooks at 7:40 AM