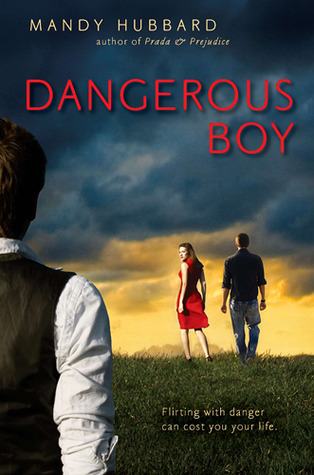 Harper has never been worried about falling in love, something she is skeptical even exists. But everything changes when Logan moves to town, and to Harper's shock, the two tumble into an intense romance. It's everything she never thought she wanted.

Then she meets Logan's twin brother, Caleb, who was expelled from his last school. True, he's a bad boy, but Harper can't shake the feeling that there's something deeply sinister about him--something dangerous. When Logan starts pulling away, Harper is convinced that Caleb's shadowy past is the wedge being driven between them. But by the time she uncovers the truth, it may be too late.

*Received a copy from the publisher for an honest review.

Dangerous Boy is a creepy, mysterious, fast-paced story. I went into this one completely blind, having not read the synopsis (Thank goodness. Such a giveaway).There were several aspects of the story that kept me intrigued throughout and as a result, I ended up liking it. I was entrapped in the setting; the way it was elaborated in the pages really had me envisioning every single thing, from the dairy farm the character lived on down to the smell of the country air. It was nicely written and I'm glad I waited until after I finished the story to read the info on the author because I noticed she grew up on a dairy farm so, maybe she was describing a life she had known quite well. In any case, the world building was greatly portrayed. That part impressed me.

As for the characters, they were all likable. I would have liked to get more into Harper's father and get a stronger sense of how disconnected they were from each other but I guess the author did so by keeping his main focus on his farm instead of ever inquiring about his daughter's life. It really left me wondering though, that maybe she should try to get him to open up to her again. He did break a little during her accident but that was left untouched where it should've given them both an opportunity to talk again.

Where Harper is concerned, she was a good protagonist. She was just a regular teen who started dating a guy that seemed to have a lot to hide. Logan's entire aura was mysterious and he concealed so much of himself that it made even me, the reader, consumed with curiosity. I liked the fact that Harper had some good friends to help her out and provide the obvious answers when she was too silly or blinded by doubts to figure it out on her own. That whole Nancy Drew element in the mix was an interesting part of the story as well and it made me want to keep going, investigating along with Harper.

I already had Logan figured out by the time it got past the first two or three chapters. There was just too many signs to miss and I thought it was crazy how no one else could see through it all. This is the first time I've read a story focusing on such a topic so that was a refreshing air for me because its something I can say is fairly new, to me.

Overall, I liked the book. It was interesting how it opened up in a thrilling scene and I felt compelled to read on and find out who was chasing Harper and what was really going on. The ending was also good. There were no gaps. No loose ends. It wrapped up pretty nicely. The author is new to me and I hear she hasn't written anything this creepy before so I'm interested in reading some more of her works after reading Dangerous Boy. It was a good story, went by really fast. I recommend picking this one up, especially for Halloween.