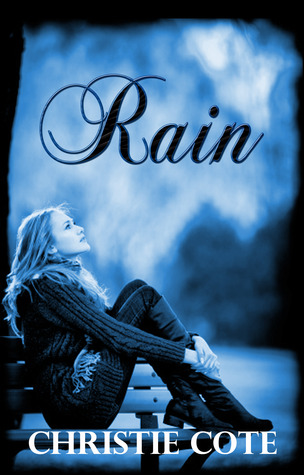 Synopsis via Goodreads:
Taylor Sullivan took her life for granted until she received news that would change her life forever. In a state of denial she met Kyle, who didn’t end up being what she expected. She wasn’t able to escape her new reality, but with his friendship, just maybe she could survive it.

Christie Cote resides in Vermont with her Husband and their dog. When she isn’t reading, writing, or dreaming up her next story, she can be found shooting targets with her bow, drawing or baking.

This was another story I went into blind. At the beginning, you're introduced to this sort of gloomy character, Taylor, and her just as sad mother. Instantly, I'm curious as to why they're so depressing and if there was a death prior or something. Turns out Taylor has been diagnosed with a life-threatening disease that has basically changed her life along with her family forever. Once happy and carefree, Taylor's left with uncertainty of how things will work for her and whether she'll be able to survive this.


Amidst her turmoil, Taylor meets Kyle, who lives across from her house. Their first encounter was rather interesting if not funny, as she was just chilling in his territory. But is this really the first time she's meeting him? Anyhoo, I liked Kyle. He was a refreshing character who stuck by Taylor regardless of the fact that she was ill. He didn't bail on her like what her boyfriend did. Speaking of the jerk. Austin. I'm somewhat unsure of his existence in the story as he didn't really matter to me. If anything, he wasn't really necessary because I didn't feel like he was a good match for Taylor even if Kyle wasn't in the story. Austin's character just didn't seem like the kind of guy Taylor would date, based on the kind of person she was. Then again, we aren't really sure of how she was before being diagnosed so who knows.

Another character I liked was Taylor's bestie, Liz. She was a burst of energy and delightful relief whenever she was around. She kept the story balanced to me, taking away from the depressive tone and bringing in some fun. I always liked having her around.

Okay, back to Taylor and Kyle. Loved how they were from the beginning. I thought it was cool how he introduced her to different kind of music and encouraged her to be more free. In a sense, he gave her strength to fight on and made her feel beautiful when she was at her lowest. Their blossoming relationship was sweet to explore. It was a lovely addition and I like that his mysterious aura will be broken down in the next book. I knew there was a lot going on behind the way he reacted to her bruises.

Overall, it was a good story and the pacing was great, if not too quick. I felt the story had some parts that if it had been slowed down and expounded on further, then it would have been more impactful. To me at least. Still, it was a good read and I'm interested in seeing where the series goes from here since it does continue. Don't worry there isn't really a cliffhanger only room for further reveals and answers.

Click on the image to see the rest of the tour: