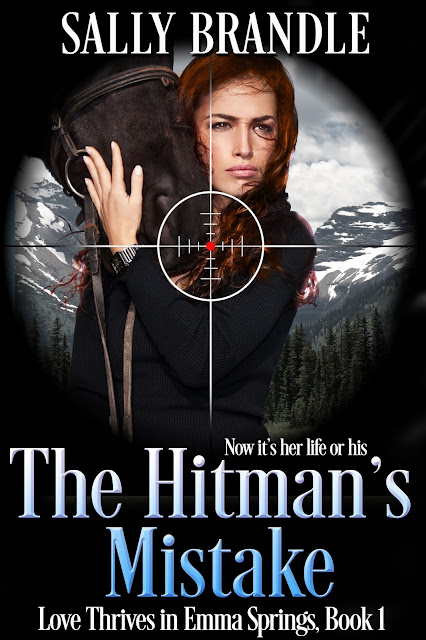 
After Miranda Whitley stops crooked cops from assassinating a prominent Seattle judge, she’s next on the hit list, and her survival depends on the buff FBI Agent she’s had one awkward encounter with. But can she find him in time?

The last person Grant Morley expects to discover on his annual supply run to a Montana mountain hermit is alluring Miranda Whitley, nearly dead from a bullet wound in her side. An accidental witness or the cold-blooded accomplice to would-be assassins?

Miranda must convince Grant of her innocence, evade the killers intent on preventing her testimony, and fight her unwanted attraction for the agent…an attraction which seems to be mutual. Fortunately, love thrives in Emma Springs. If you love sizzling chemistry, Montana’s mountain landscape, and fast-paced action, then you’ll love Sally Brandle’s galloping thriller, The Hitman’s Mistake.

Ten years ago, I quit my job and took a week to pound out the story occupying my sleepless nights. One of my delightful, intelligent sons struggled in school--a ‘would he graduate’ scenario. In order to calm my brain while lying in bed, The Hitman’s Mistake emerged. My son did graduate and after implementing tools from umpteen classes, workshops, and critiques, publishing happened for me. During the long gap, I took a different job, wrote six more books, and kept rewriting HM. The title morphed from A Man, A Mule, and A Mountain of Trouble, to Inconspicuous, to The Hitman’s Mistake, but the core story and characters never changed.
I live outside Seattle in a suburban/rural area. A neighbor pastured his hunting mule and horse nearby, and he kindly facilitated horseback rides for a birthday party we hosted for a young Irish girl. Big Red stood about sixteen hands, but carefully monitored the little kids and nuzzled their hair. The novella I’m currently writing tells his backstory, as fictionally portrayed in The Hitman’s Mistake. Yes, the mule.
My editor suggested I create a giveaway short story for my newsletter readership and after brainstorming characters from HM, she suggested Big Red. “Hmm,” I pondered. “Oh, and it has to be a thriller,” came her reply. Work continues on the temporary title, Romantic Mule Thriller. I tease that I’ll be crowned the queen of mule-lit, but in reality, each story in my first series, Love Thrives in Emma Springs, contains an equine character.  Wonderful Soul Mate editor, Sharon Roe, purchased Virtue and Vengeance, the second book in the series with a mini horse, and it’s due out in October. Hopefully, we’ll team up on the remaining four, featuring my Quarter Horse, a zebra, a retired police horse, and a pony.
I’d love to hear comments about the second series I’ve begun writing. Instead of a rural Montana backdrop, this group of romantic suspense stories delivers a scientific twist. The first book, A Disturbing Departure, finds a reporter and a movie star, estranged friends and both reeling from betrayal, reuniting to foil a plot to destroy the US power grid by a solar power zealot. Too many stories, too little time. Happy reading and please know, authors love your reviews. Sally.

About the Author
Multiple award-winning author Sally Brandle writes clean, contemporary, romantic suspense stories. She left a career as an industrial baking instructor so that she could bring to life her stories of courageous women supporting one another while they discover men who deserve their love. A member of Romance Writers of America, Greater Seattle RWA, Eastside RWA, and She Writes, Sally’s current series, Love Thrives in Emma Springs, is set in rural Montana.