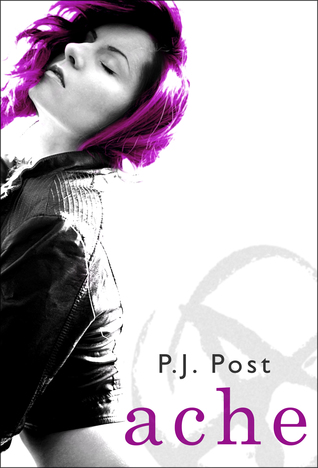 His only refuge is his music. His only solace is his rage.

Connor Clay abandoned any hope of escaping his troubled life long ago and has immersed himself in the hardcore punk scene, living every day as if it were his last. But in the scorching summer of 1982, he meets Shauna, an upper middle-class girl that seems to be everything he wants and needs.

Unfortunately, she also represents everything that he hates.

*Downloaded the ebook via Kindle

Ache was undoubtedly an interesting read. The story dealt with topics that are raw, gritty and relatable. But while I did see the potential, enjoyed the 80s time setting and liked the plot somewhat, it just didn't quite give me the fireworks that I was hoping for.

In the opening chapter, Connor comes in contact with this intriguing girl that rattles his demeanor in a way. I was hooked and wanted to see where their relationship would go, if they would have one. Then going into the second chapter, we find Connor setting his eyes on someone else. I was a bit confused at first because I hadn't realized that years had passed. So throughout I kept asking, "Where is that other girl?" That's when I skipped back and realized it was a few years later. For some reason I missed that. Anyway, Connor likes Shauna (for the wrong reasons) and really wants to give a relationship with her a chance. It's tough trying to win her, but they eventually come together.

Now at first I thought, okay maybe things didn't work out with the previous girl (Bethany) and Connor wants to move on to someone else. However, I started to remember that he was a tad intoxicated that night and couldn't remember exactly who she was. I feel like the impact that his mystery girl left on him that one night made him go looking to find that in Shauna. But the whole time he's crushing on her, I was more curious about his bandmate Tonya. She's described as having deep issues. I had my suspicion about her and felt excited when I received confirmation during that confrontation at the laundromat. My curiosity heightened and I wanted to know so much more than what was being teased about Tonya, but I'm guessing we'll get her full story in the second book.

Back to Connor and Shauna. This is where my feelings toward the story started to go all over the place. Shauna seemed like a nice girl at first; someone cool enough to not judge Connor and understand what he was going through, because he certainly had some painful physical and emotional scars. But all of a sudden they were moving so fast. I mean, I know that Connor had been crushing on her for some time, but it got too intense only after three days and I kind of felt turned off with Shauna's sudden switch in behavior. There were other things that seemed a bit random too, but they didn't bother me as much as how rushed some parts were.

Again, it was a good read with clear and fluid writing that pulls you into the 80s punk rock scene, but for this kind of plot, I wish things had slowed down so I could connect more. I'm still interested in the series though, and am very curious about Tonya's story.

Posted by Shane @ItchingforBooks at 1:26 PM