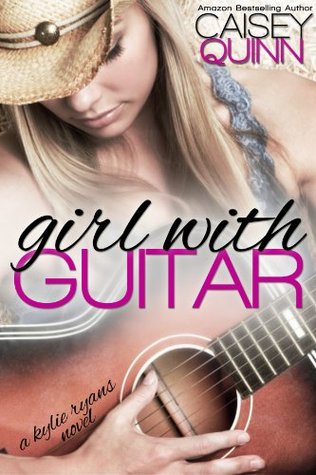 *This is a New Adult Romance and contains MA 17+ Content.

After Kylie’s dad dies in a freak accident, he leaves her with nothing other than her crazy stepmother, Darla, and the ability to play guitar. When Darla kicks Kylie out and she loses her job all in the same day, she hops a bus to Nashville determined to make her late father’s dreams come true.

Waitressing and saving her pennies to record a demo, her big break comes when she’s asked to join a tour going down the tubes with once platinum album-selling country music superstar Trace Corbin. But touring with Trace is hardly a dream come true since he’s pretty much drinking his career down the drain. If Kylie can’t pull Trace out of his rut, he’ll pull her and her dreams down with him.

It was an enjoyable story filled with wit, humor, and lots of drama. To say this was an emotional roller-coaster is an understatement. It's beyond that. Girl With Guitar has been on my TBR for what feels like ages and after glimpsing it a few days ago, I decided to purchase the book and give it a read. Glad I did.

My interest was kept from start to finish. Here we have this young girl who's had a rough ride and finally her dreams are coming true after one very coincidental performance.
Kylie is a likable, relatable character. She's strong, her talent is felt throughout the pages, and you can definitely see how much of an emotional person she is. Her journey to finally making music is one hell of battlefield between her and Trace. And one that you'll never get tired of.

I liked the tension between the main characters from start. It wasn't insta-love, but you can sense the attraction Kylie felt for this appealing country singer with troubles of his own. It was quite admirable, the way she'd stand up to him and try to get him to straighten himself out. Unlike some of the people around him, Kylie wasn't afraid to tell him like it is or get rid of the crap that's fueling his problem. She's a headstrong girl. I felt her character was perfect for someone like him.

Trace was quite a handful. At times rude, but then once you get to know him you start to see why he why he was self-sabotaging like that. Beyond the rude remarks and unnecessary trouble he got himself in, was a really nice guy who deserved some love and affection from a girl who was real and honest with him. Thankfully, Kylie was that girl and I'm glad not only he did, but that she realized how much they wanted to be together towards the end.

Overall, it was a great story with a sweet, convincing romance, captivating song lyrics that I could imagine myself singing, and really fast-paced and intriguing writing. The one thing that bugged me was how they kept misunderstanding each other and were too stubborn to just say how they feel, especially Kylie. I get it, that's the kind of person she was. But it felt like a particular issue was drawn out when it could have just wrapped a few pages sooner. Regardless, it was an enjoyable story and I do recommend if you're a country music fan, as well as a lover of coming of age books about characters chasing after their dreams and having them come true in spite of the bumps along the road.

Posted by Shane @ItchingforBooks at 9:46 AM