Review: Walk Me Down by H.J. Bellus 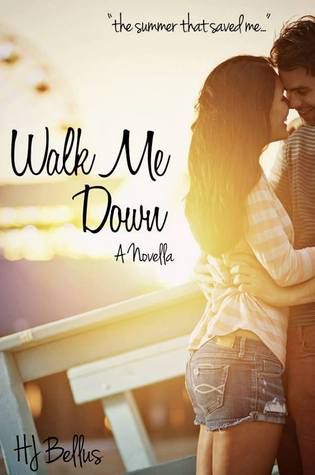 Graduation night was the worst night of my life.
My heart was shattered, lives were lost, and permanent wounds formed.

I hate the color red. I hate my old shallow self. I hate life.

Stuck in my sister's town over the first summer since tragedy struck, I only have my crazy best friend to make life as normal as it can be.

Until...
One broken tooth
One hot stranger, Finn.
Makes me hate less and hope for more. This summer has the potential to save me, but only if I find the courage to let it. My name’s Tess and this is my story.

*Purchased ebook for only 99 cents via Amazon Kindle.

Walk Me Down surprised me. I really wasn't expecting to love this novella so much because at start, Tess seemed really shallow to me and I kept rolling my eyes at some of the things she'd say. But then boom, a terrible accident occurs, and she loses everything, including a part of herself. After that, she became really closed-off and quite the pessimist. But her character from then on was funny and snarky. I liked her as the progressed, though it was fast. But yeah, it is a novella.

I liked her relationship with her sister and her brother-in-law. It was unique in a sense, but interesting to read about their closeness. I've never read such a thing in books before, and It's cool that she could talk to them about anything, or cry in their room in the wee hours at night. That was entertaining. All the characters were pretty straightforward and to the point. Well, except for Tess. She was bottling her emotions up until she met Finn.

Finn had me confused at first. He seemed like a sweet guy who really was interested in Tess, but then he just couldn't shake his ex off him. I'm glad that he finally was able to and even stood up to his father for what he wanted. It was sweet, how clear his feelings were for Tess, and how he accepted every single thing about her. Things she feared would turn him away, Finn had no problem with. He wanted to be with Tess no matter what.

So all in all, the only problem I have with Walk Me Down is the fact that it wasn't released as a full length novel, and the author left me with my mouth open after that shocking ending. But regardless, the story was very interesting. I absolutely cannot wait for the conclusion to Tess and Finn's story. Good job, H.J.

About the Author
I am an independent author excited about releasing my first novel very soon. A big dream coming true!!! I'm all country...the kinda country where green grass grows and corn pops up in rows....love Miranda and her bad ass music!!! Just a simple country girl getting one story out of her head at a time...I always fall hard for a trucker style hat...especially if it's a John Deere hat....loves me a good ol' farm boy!!!!!!

Posted by Shane @ItchingforBooks at 1:18 PM