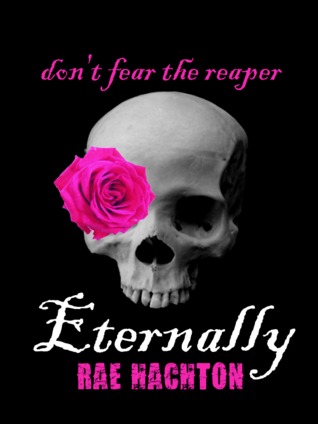 She's a lonely girl who spends all of her time investigating a haunting town legend.

They are brought together at Withering House—a place harboring buried secrets and paranormal activity.

Over the summer, they develop a friendship that turns into something more as she helps him through his addiction and he agrees to explore the legend with her.

This summer, they're about to discover what it really feels like to find that one person you'd do anything for.

I think it's safe to say that I will enjoy absolutely anything Rae Hachton writes. She has the ability to suck you in with her dark and hauntingly beautiful words, and Eternally was no exception. I loved it! My gosh, how do I review the story without giving too much away? Okay, here goes:

Eternally is told entirely from the POV of Heath. Loved that. I haven't read a book written with male narration in a while so that was a breath of fresh air. And I liked Heath's character, mostly because he was so flawed. As was Catherine, but I feel that it was good the book was in Heath's perceptive because he had so much more going on. Addiction being one of it. I must admit, it was weird at first to read about a character shooting up, but it was so believable. The escape that Heath got from drugs was convincing. That's how good the description was.

Okay. That painful truth aside, his character was really interesting. Funny, sarcastic, straightforward, and even though he himself didn't realize it at times, he was kind and loyal. After everything with Catherine and how annoying she was to him at first, he still stuck with her and took care of her. That was the sweetest thing he did. No matter the other entity that tried to get in the way of them getting involved with each other, Heath still stayed with her and kept her safe. Until the end.

As for Catherine, she was a pain in the ass to Heath and to me at first. But then I liked how she wanted so badly to help him with his addiction, and the fact that she had so much hope in a guy she didn't know was commendable. A lot of people would have given up on Heath but not Catherine. She believed he would change. And with her help and support, he did. He let go of the pain brought on by so many things in his life and started to believe things would get better for him. Kudos to Catherine for helping him with that because in reality, many addicts don't have a single support left in their lives.

Overall, it was a really good story. If you're a fan of Gothic novels, like me, you will enjoy this one. The plot was intriguing. I liked the eerie setting and backstory, and of course Catherine's obsession with the history of the town and Withering House. There were times I was freaked out by all the spooky stuff that took place, but that made the story even more exciting. Their longing for each other was another major seller for this book too. Their feelings were intense and definitely believable. It would have to be, because their love is something that helps drive the turn of events towards the end.

By the way, it was painful to read the ending. I was about to lose my mind because it'd hit me so hard. I really didn't want it to work out that way but there was so much build up to it that you knew things couldn't be so perfect. And this is a Rae Hachton book, so of course it would be about tortured love. Now I'm eagerly awaiting the second book and how Heath and Catherine's story will play out. I strongly hope their love will enable them to have another moment in time.

Rae Hachton Writes Dark Romanticism--sometimes with gears and clockwork. Has cemetery obsession. Misses Victorian London and ancient Rome. Believes in vampires and magic. If imaginary, she would be an automaton fairy. Corvidophile. Content.
"My Primary goal is to Scare you/Haunt you, but make you fall in love at the same time. I'm a Monster Lover who writes Dark Fantasy and Gritty Contemporary. Also a believer in dark and twisted fairytales and Scarily-Ever Afters."
www.raehachton.com | TWITTER | INSTAGRAM

Posted by Shane @ItchingforBooks at 7:35 AM