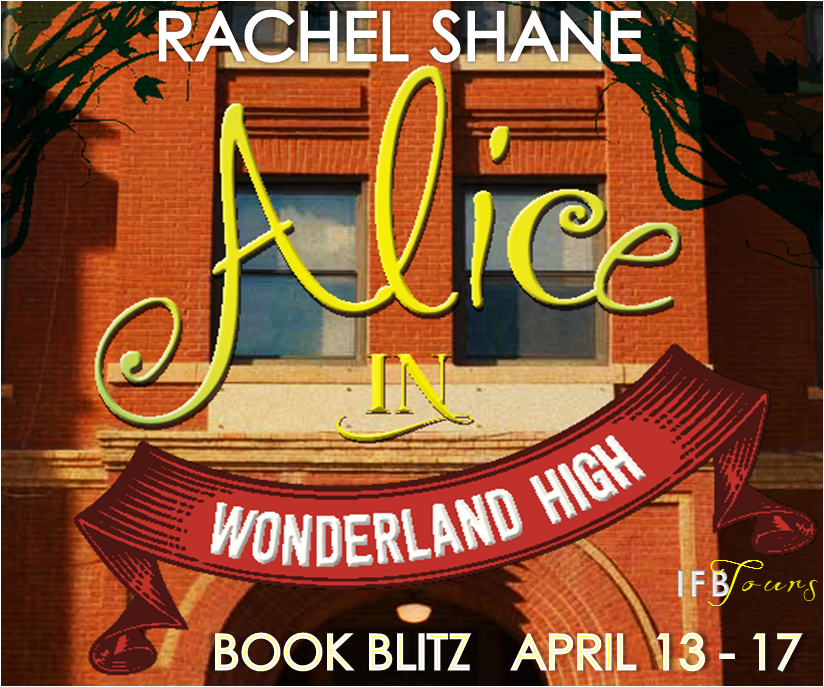 The promo event for Rachel Shane's YA Contemporary Retelling has ended.

Sixteen-year-old Alice suppresses her need for rebellion after a petition to start a farmer’s market receives more snickers than signatures. That is until Whitney Lapin, a girl who speaks in cryptic riddles and spends her free time turning abandoned warehouses into beautiful gardens, leads her on a rabbit trail into the underground–aka secret society–of Wonderland High. Curiouser and curiouser.

Even though Whitney’s group of teenage environmental vigilantes operates on the wrong side of the law, Alice has never felt more free to be herself. Soon she stomps on her good girl image by completing a series of environmental pranks to impress them: flooding the school and disguising a pig as a baby in order to smuggle it out of a testing facility. But the group refuses to help with the farmer’s market or reveal their hidden agenda. She wants to trust them, and she especially wants to trust (or maybe kiss) Chester Katz, a boy with a killer smile, a penchant for disappearing, and a secret that will really turn Alice‘s world backwards. When one group member tries to frame Alice for all the pranks, she must figure out their secret before she ends up in front of a jury that’s screaming, “Off with her head!”

The plan had seemed utterly attractive while lying in bed. Foolproof, even. Take the keys. Go inside. Find the information to link someone to the crime. Sole the case. What I hadn't factored into everything was guts, which happened to be something I lacked.


I paced in front of Town Hall, my heart pounding as if it was ready to escape my chest and ditch me completely. I paused in front of the rows of white rosebushes lining the entrance and took a deep breath.


You're not breaking and entering, I liked to myself. You have a key.


I counted to three and yanked the keys out of my pocket, but my hands were too clammy. The keys leapt out of my fingers and hit the ground with a metallic clink.

I should go home and forget about Kingston's stupid-as-hell plan. I tried to move, but my feet wouldn't budge, weighed down by cemented desire. As scared as I was, I wanted to do this. I fumbled for my phone. 3:10 blinked back at me on the LED screen. If I had Chess's phone number, I would call him. Accomplices equaled encouragement.

But it wouldn't have mattered; Chess had refuted Kingston's idea. So had Whitney. If I called her, she'd try to talk me out of this. I knew what a bad idea it was. I'd broken up with my sense of reason when I first followed Whitney through the woods. Might as well descend even farther down the path of wrong and stupid. I let out a crazy laugh that echoed in the silent darkness.

Before I could stop myself, I flipped through my cell phone until I found Kingston's number. It was absurd that Whitney had made me add my least favorite person's number when I still didn't have my own boyfriend's. Tonight, though, it came in handy.

"What?" he said when he picked up. He didn't sound tired, more like…prepared.

"Wow. Didn't strike me as the booty-call type."

My nerves erupted out of my mouth in a laugh that sounded almost flirty. I covered it up with a cough. He was calling me crazy, and this was the first time he made sense. "I'm outside Town Hall."

"Yeah." The word came out all choked.

"As soon as I hung up, the gravity of what I'd done hit my stomach like a cartoon anvil. I'd just committed to committing a felony. With my enemy.

Rachel Shane studied Creative Writing at Syracuse University and now works in digital publishing at in New York City. She lives in New Jersey with her husband, young daughter, and a basement full of books. ALICE IN WONDERLAND HIGH is her first novel.

Posted by Shane @ItchingforBooks at 3:38 PM