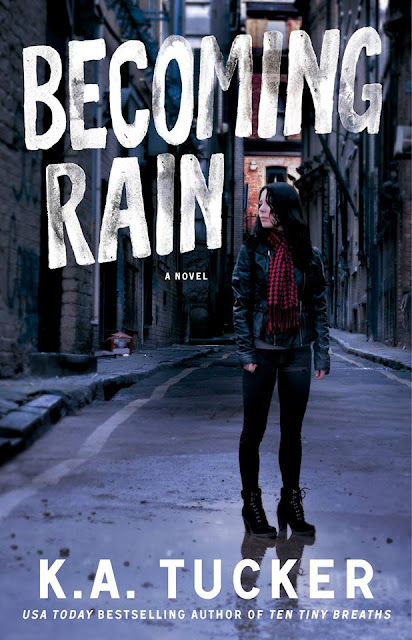 Luke Boone doesn't know exactly what his uncle Rust is involved in but he wants in on it-the cars, the money, the women. And it looks like he's finally getting his wish. When Rust hands him the managerial keys to the garage, they come with a second set—one that opens up the door to tons of cash and opportunity. Though it's not exactly legal, Luke's never been one to worry about that sort of thing. Especially when it puts him behind the wheel of a Porsche 911 and onto the radar of gorgeous socialite named Rain.

Clara Bertelli is at the top of her game—at only twenty-six years old, she's one of the most successful undercover officers in the Washington D.C. major crime unit, and she's just been handed a case that could catapult her career and expose one of the west coast's most notorious car theft rings. But, in order to do it, she'll need to go deep undercover as Rain Martines. Her target? The twenty-four-year old nephew of a key player who appears ready to follow in his uncle's footsteps.

As Clara drifts deeper into the luxurious lifestyle of Rain, and further into the arms of her very attractive and charming target, the lines between right and wrong start to blur, making her wonder if she'll be able to leave it all behind. Or if she'll even want to.

A world of luxury and danger becomes intriguing in this thrilling follow-up to Burying Water. While the latter provided an intense and dramatic look at the consequences of crossing a crime boss, Becoming Rain takes us much deeper. Thankfully, Clara managed to evade that world without a scratch, but finds romance amidst it all.

I actually enjoyed this book more than the previous. The story moved along smoothly and it didn't feel as drawn out as the first. And while I didn't like Luke's character as much before, I liked what he did for Water and I really warmed up to him in Becoming Rain. It was great to get inside his head and establish an understanding of his loyalty to his uncle and family. Before, I was upset with him for wanting to continue working with his uncle, but I kind of understood his reasons and why such a lifestyle would fascinate him. It was also nice to see him unravel and finally fall for just one girl. I didn't realize how sweet and considerate he was. He made me melt with his charm and the wonderful way he treated Rain.

Clara AKA Rain came into the situation as an agent who not only wanted to succeed and boost her career, but she also wanted to help put an end to what those men were doing. Luke was her target. She studied him, lured him in, basically did what she had to in order to gain his trust. But soon, things started to get complicated. Her feelings for Luke and her position as an agent became an internal struggle. I knew that was bound to happen since I started reading, so from beginning I kept saying to myself, "this is going to be disastrous", because how on earth was their relationship going to work? I mean, after her cover was revealed to him, Luke felt deeply betrayed. And I could understand why. She was the first woman he'd trusted, so his reaction was expected.

These two intriguing characters and their sexy and dangerous relationship kept me interested, and that has a lot to do with the terrific writing of Miss Tucker. She sure has a way with words and knowing how to pull you into a story. K.A. definitely gave me a vivid picture of this frightening world of wealth and power. The criminals were either mysterious or scary when need be. And while I didn't approve of what Luke's uncle was doing, the author managed to get me to still sympathize for him and Luke. That's a good thing.

It was also nice to revisit the characters from the previous book. Glad to know they're doing well and staying out of trouble.
Overall, I truly enjoyed Becoming Rain. The characters were just great and the plot reminded me of one of those crime dramas on TV. And even though it would have been more exciting if a certain person showed up in the end and there was some kind of stand off between Clara and his guys, I still liked how things played out for her and Luke.

Posted by Shane @ItchingforBooks at 11:12 AM