Review: Before We Were Strangers by Renée Carlino 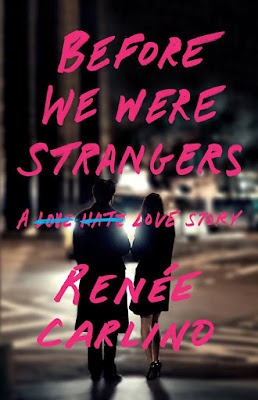 From the USA TODAY bestselling author of Sweet Thing and Nowhere But Here comes a love story about a Craigslist “missed connection” post that gives two people a second chance at love fifteen years after they were separated in New York City.

To the Green-eyed Lovebird:

We met fifteen years ago, almost to the day, when I moved my stuff into the NYU dorm room next to yours at Senior House.

You called us fast friends. I like to think it was more.

We lived on nothing but the excitement of finding ourselves through music (you were obsessed with Jeff Buckley), photography (I couldn’t stop taking pictures of you), hanging out in Washington Square Park, and all the weird things we did to make money. I learned more about myself that year than any other.

Yet, somehow, it all fell apart. We lost touch the summer after graduation when I went to South America to work for National Geographic. When I came back, you were gone. A part of me still wonders if I pushed you too hard after the wedding…

I didn’t see you again until a month ago. It was a Wednesday. You were rocking back on your heels, balancing on that thick yellow line that runs along the subway platform, waiting for the F train. I didn’t know it was you until it was too late, and then you were gone. Again. You said my name; I saw it on your lips. I tried to will the train to stop, just so I could say hello.

After seeing you, all of the youthful feelings and memories came flooding back to me, and now I’ve spent the better part of a month wondering what your life is like. I might be totally out of my mind, but would you like to get a drink with me and catch up on the last decade and a half?

*Publisher approved request via Netgalley in exchange of an honest review.

Before We Were Strangers completely blew me away. I wasn't expecting what Renee had in store for me, and let me tell you, that blurb barely sums up how crazy this story is. Like I'm seriously struggling to put my thoughts together to explain just how much I enjoyed Matt and Grace's tumultuous journey--from their funny first encounter to the moment when they finally reunited. I connected right off with these two. I felt their joy, their sorrow, and their love. Every page felt real. The characters felt real, and their emotions felt real. I simply can't get enough of them and I'm beyond happy with the way things worked out, even if so much time had passed where they were separated.

I loved going back to their time in college and learning about Matt and Grace. They were both from different backgrounds, but drawn together through art and something else. Something intense and true. They began as friends and that blossomed into so much more. It's funny how they were so in love with each other before even realizing it, and once their feelings were clear it was definitely hard to deny.
I hated the circumstances and the misunderstandings that caused their separation, and at times I was mad at them too. There were moments where maybe they should have fought harder for each other and not just give in. I mean, their love was so strong that even after fifteen years, they still couldn't move on. I had predicted a little about what happened to Grace, and it sucks that Matt missed out on that and wasn't there for her during that particular time. And even though it's not their fault and someone horrible fueled the problem, I felt that Grace could've tried to speak to Matt face-to-face, regardless of what she was led to believe because she was following his career and had an idea of what he was doing, while Matt had no clue whatsoever as to how to find her. But hey, their love wasn't perfect and it didn't work out immediately for them. And it's sad that all that happened to a couple who wanted to be together so badly, but life is crazy and some things happen for reason, especially since both got to live out their dreams and experience a world apart for a while. No matter how long.

Aside from the awesome characters and storytelling, Carlino did a great job bringing New York city to life in both time period. Her words sucked me in fast and I couldn't stop reading. I literally had to force myself to put down my kindle and go to sleep. The story is just that good. And like I said, the characters are fleshed out wonderfully. Everything about them felt real and their relationship was easy to root for. I also loved LOVED the ending. It had me smiling and tearing up with excitement. Gosh. I have to stop here before I give too much away. This is my second Carlino novel and I'm so happy to have discovered her because she's a terrific writer that knows how to tug at the heart. I highly recommend this one!

About the Author
Renée Carlino is a screenwriter and bestselling author of romantic women's novels. She lives in Southern California with her husband, two sons, and their sweet dog June. When she’s not at the beach with her boys or working on her next project, she likes to spend her time reading, going to concerts, and eating dark chocolate.
www.reneecarlino.com | twitter.com/renayz | facebook.com/AuthorReneeCarlino