Review & Giveaway: Until We Meet Again by Renee Collins 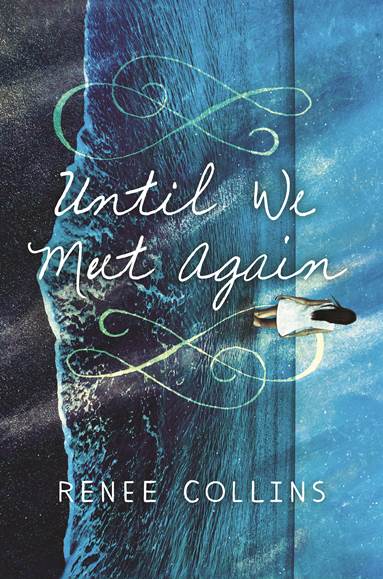 
They exist in two different centuries, but their love defies time


Country clubs and garden parties. The last thing Cassandra wants is to spend the summer before her senior year marooned in a snooty Massachusetts shore town. Cass craves drama and adventure, which is hard when she just feels stuck.


But when a dreamy stranger shows up on her family’s private beach, claiming that it is his property—and that the year is 1925—Cass is swept into a mystery a hundred years in the making. As she searches for answers in the present, Cass discovers a truth that thrusts Lawrence’s life into jeopardy. It won’t matter which century he is from if he won’t live to see tomorrow.


Desperate to save the boy who’s come to mean everything to her, Cassandra must find a way to change history…or risk losing Lawrence forever.

Until We Meet Again completely blew me away. Truly an emotional story with wonderful writing and two intriguing characters that will have you invested greatly.
I haven't read many books about time-travel, and in this one I loved how the author delivered the element of two very different time periods crossing only on the beach. Both Cassandra and Lawrence had this longing in their hearts, and they found some sort of peace by the water. From the moment of their first encounter to the ending of the story, they had me so convinced of their feelings and I could feel every spark between them. They had me smiling, crying, just utterly pulled into the story. I went in with an open mind and without expectations, and in the end it made such an impact on me that I'll probably be thinking about the characters for a long time.

I liked how both were on summer vacation at that house, it made things more interesting because they seemed to be in the right place and at the right time. And it's amazing how something as otherworldly like that was taking place on that beach whenever the moon was in a particular phase, and possibly no one before Cassandra or Lawrence had experienced just what they had. It made their encounter that much more special, in my opinion. Because in a way, it felt like that only happened just for them. Just so they could meet.

Of course, there was always that side of me that suspected something would happen because they were after all, meant to be years apart. And something did happen to make them think they probably shouldn't be talking, much less developing feelings for each other. And for a moment there Cassandra tried to keep away from Lawrence and anything having to do with the beach, but then she finds out something horrible and just had to try and save him. They had a pull between them too that even if she hadn't learned about his demise, she probably still would have gone back to the beach.

Speaking of demise, I liked how the story wasn't all about their blooming romance, individually they had their issues and were after all, two young adults trying to figure stuff out. Lawrence wanted to do so much. He had dreams he wanted to accomplish and yearned for the support and understanding of his family, but sadly his life was planned out for him and it was hard to go against his father and uncle. Cassandra had her problems too, but I was particular curious about her relationship with her mom. There were moments I didn't like her mother and wanted Cass to stand up to her, but I had to consider the situation and in time, I understood her mother's intention and saw that she had nothing but love for her daughter.

Aside from their individual family issues, there was also an inclusion of mystery. A major part of the story, actually, and I liked how Cass and Lawrence sought out information in the way one would in their time. Amid the amazement of crossing times and basking in this sweet romance, fear still loomed around them and like both characters, I wanted so badly to know who did that to Lawrence and why. I had my suspicions about the girl he was promised to marry, but it seemed too easy to just blame her and in the end, I understood why.

The story entails a lot more but I don't want to give too much away. Instead, I'll conclude by saying definitely give this one a read. The bittersweet romance between Cass and Lawrence will have you tearing up. I knew from the beginning it would be difficult for them to be together, being that one would have to choose to leave their time for the other. But every moment they shared was still rather interesting and I was rooting for their love right to the end. It's a quick read with a beautiful summer setting and alluring writing. Like I said, emotional. So do have tissue nearby.

The beach is empty. In the fading glow of twilight, the waves roll up to the rocks in sweeping curls of white foam. The sand glistens like wet steel. The grass bends low in the briny night wind. Always changing, yet always the same. I imagine the beach has looked like this since the beginning of time.

Stepping onto the soft terrain, I feel transported to some ancient evening, eons ago. Long before my uncle claimed this land as his own. Long before man even dared to taint these shores.

I wish the fleeting vision was true.

My gaze falls to the full moon’s reflection on the water. It’s broken into shards on the black sea, tossed about with each wave. A small, white shape catches my eye. It’s in the glare of the reflection, so I nearly miss it.

I step into the wave break. A seabird, dead and limp, is rolling back and forth in the foam. Her wings are spread open, her white-and-brown-speckled breast exposed.

I lift the small creature into my palm. What killed her? I wonder. There’s no sign of injury. Did she drown in the sea? Pinching her brittle, fragile leg gently between my fingers, I notice a small metal band snapped around her ankle. The sight of it startles me. Examining it closer, I catch the faint impression of numbers and letters etched into the band, but something in me resists reading them. I can’t say why.

What does it matter, anyhow? The poor creature is dead. And she reminds me that there is no going back. Time howls on, like the wind. And it is not only weaker creatures like this bird that succumb to it. Even the strongest man will fall before its crushing forward push.

I set the bird out into the water. As the tide pulls her away, I accept this truth. Soon the summer will be over. Too soon.

Posted by Shane @ItchingforBooks at 8:08 AM