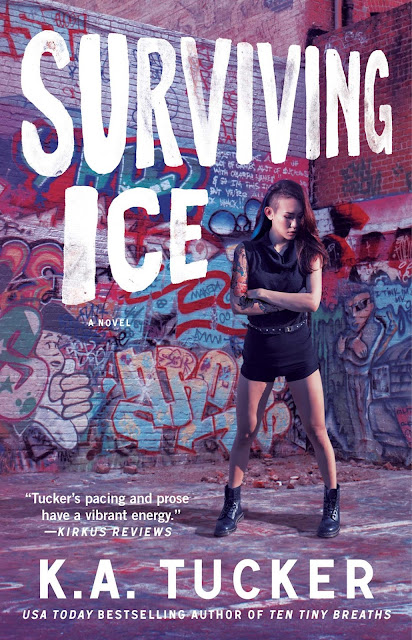 Ivy Lee, a talented tattoo artist who spent the early part of her twenties on the move, is looking for a place to call home. She thinks she might have finally found it working in her uncle’s tattoo shop in San Francisco. But all that changes when a robbery turns deadly, compelling her to pack up her things yet again.

When they need the best, they call him. That’s why Sebastian Riker is back in California, cleaning up the mess made after a tattoo shop owner with a penchant for blackmail got himself shot. But it’s impossible to get the answers he needs from a dead body, leaving him to look elsewhere. Namely, to the twenty-something-year-old niece who believes this was a random attack. Who needs to keep believing that until Sebastian finds what he’s searching for.

Ivy has one foot out of San Francisco when a chance encounter with a stranger stalls her departure. She’s always been drawn to intense men, so it’s no wonder that she now finds a reason to stay after all, quickly intoxicated by his dark smile, his intimidating strength, and his quiet control.

That is, until Ivy discovers that their encounter was no accident—and that their attraction could be her undoing.

LOVED it! Surviving Ice is raw, intense, twisted, dangerously sexy when it should be, and very intriguing. It's just overall the right kind of mix for a great suspense novel.

Ivy is imperfectly perfect. She's a tough woman who doesn't take crap from anybody and I love how confident and strong she is, and at the same time there is a sense of vulnerability about her character. While we got a bit of that in the previous book, Surviving Ice depicts that softer side of Ivy a little more, but without making her too soft or seem like she's lost her edge. And I'm glad that Tucker held on to that throughout the story.

So the book opens up with Ivy at her uncle's tattoo shop. All seems well and we get the feeling that she's found somewhat of a place to call home and maybe will stick around longer than she normally does. But then something very tragic happens and Ivy is caught up in the mix. I can't even begin to imagine witnessing something like that. The realness of the scene was quite intense. I could visualize everything taking place so vividly in my head. Ivy's uncle seemed to be as tough as she was but he understood her personality and saw the best in her. So the pain of losing him was quite real, and if it were me I'd be just as intent on finding the people responsible, no matter the dangers of my search.

In comes Sebastian, a former Navy SEAL working for a security company called Alliance, that turned out to be behind the horrific event that took place at Ned's shop. Ned knew something he shouldn't, which led to his demise, but he also left some evidence behind that Alliance would like to retrieve discreetly. In Sebastian's mind, what he and his friend--the owner of Alliance--does is justifiable because it's in the best interest of the country. Bullcrap. Their methods of shutting people up made me want to barf and it's terrifying to know that this happens for real. But sadly, Sebastian isn't aware of some of the disgusting acts Alliance allows to continue, so it was a good thing he was called in to retrieve the evidence hidden by Ned because he wouldn't have discovered the truth about the company he believed in so strongly.

From the beginning, the situation was intense. Sebastian, like Ivy, was used to not staying in one place or getting attached. In the past he had, but have since dedicated himself to working for Alliance and staying away from anything else that required commitment. Basically he'd been through a lot and carried guilt around. And no matter how hard he tried to keep his feelings out of the mix and do his job, with Ivy he started to shatter that cold front, and along the way, he managed to shatter hers as well.

It was interesting to see these two flawed characters learn to open up and develop feelings for each other. And amid the dangers lurking around them, I'm happy that there were some flirty moments and that they found romance in their way. One may not consider these moments very romantic but like I said, it was done in their way--rugged and raw--and it worked for them.

The overall plot is great. The writing, as usual, is superb. K.A. is a wonderful story-teller who knows how to keep things interesting, whether with the suspense or unraveling characters so we can see what's beneath the surface. And what I love about Ivy and Sebastian is how real they are, and in a way, their flaws make them that much more beautiful. Such a great story and wonderful conclusion to an awesome series. Surviving Ice would have to be my favorite. There's something about Ivy that had my attention from the very moment I came across her character, and for some reason she has resonated more with me than the other women in the series. I'm sure when you've read this one you'll understand what I'm saying, and may discover that she is indeed hard to forget. I highly recommend.

Born in small-town Ontario, K.A. Tucker published her first book at the age of six with the help of her elementary school librarian and a box of crayons.

She currently resides in a quaint town outside of Toronto with her husband, two beautiful girls, and an exhausting brood of four-legged creatures.

Posted by Shane @ItchingforBooks at 12:19 PM