CAN'T WAIT TO READ: The Weight of Zero by Karen Fortunati 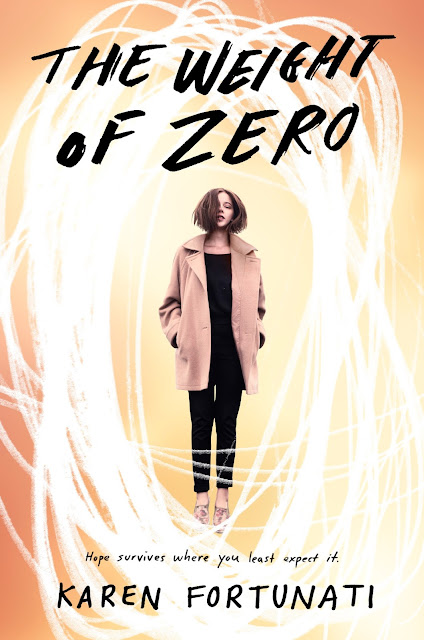 Synopsis via Goodreads:
Seventeen-year-old Catherine Pulaski knows Zero is coming for her. Zero, the devastating depression born of Catherine’s bipolar disorder, almost triumphed once; that was her first suicide attempt.

Being bipolar is forever. It never goes away. The med du jour might work right now, but Zero will be back for her. It’s only a matter of time.

And so, in an old ballet-shoe box, Catherine stockpiles medications, preparing to take her own life before Zero can inflict its living death on her again. Before she goes, though, she starts a short bucket list.

The bucket list, the support of her family, new friends, and a new course of treatment all begin to lessen Catherine’s sense of isolation. The problem is, her plan is already in place, and has been for so long that she might not be able to see a future beyond it.

This is a story of loss and grief and hope, and how some of the many shapes of love—maternal, romantic, and platonic—affect a young woman’s struggle with mental illness and the stigma of treatment.

Karen Fortunati is a writer of contemporary, realistic YA. The subject of her  first book, The Weight of Zero, is mental illness, specifically bipolar disorder, and it explores the shame, stigma and anxiety that often complicate the management of this chronic condition. The issue is personal to her, having witnessed the impact of depression and bipolar disorder in relatives and friends. Karen's goal was to write a story of hope for teens who struggle with mental illness.

Her path to writing and publication was a long and indirect one. She graduated from the University of Scranton with an accounting degree and then got a law degree from Georgetown. After working as a lawyer for many years, Karen found herself growing interested and then fascinated with history, specifically the American Revolution. This fascination sparked the idea for a middle grade story, so between family, dogs and a return to school (Trinity College for a master’s degree in American Studies), she threw herself into writing.

Success for that middle grade story never arrived. But that was okay. Because another idea was brewing, one that moved Karen in a way her first story never had. About a girl who had to deal not only with the standard pressures and stress of high school but also a much heavier weight – a mental illness. The story would be about her struggle to come to terms with it. It became The Weight of Zero.