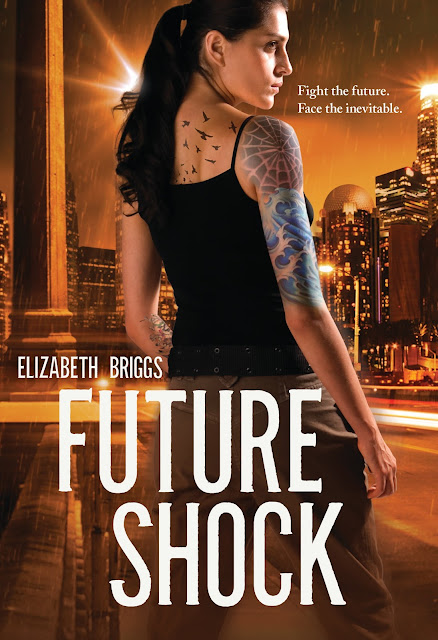 What do you do when the future is too late, and the present is counting down to an inevitable moment?

Elena Martinez has street smarts, the ability for perfect recall, and a deadline: if she doesn’t find a job before she turns eighteen, she’ll be homeless. But then she gets an unexpected offer from Aether Corporation, the powerful Los Angeles tech giant. Along with four other recruits—Adam, Chris, Trent, and Zoe—Elena is being sent on a secret mission to bring back data from the future. All they have to do is get Aether the information they need, and the five of them will be set for life. It’s an offer Elena can’t refuse.

But something goes wrong when the time travelers arrive in the future. And they are forced to break the only rule they were given—not to look into their own fates. Now they have twenty-four hours to get back to the present and find a way to stop a seemingly inevitable future—and a murder—from happening. But changing the timeline has deadly consequences too. Who can Elena trust as she fights to save her life?

The first book in an unforgettable series about rewriting your destiny in the city of dreams.

I haven't read many sci-fi books so I wanted to give Future Shock a try. After reading the blurb, I was super curious about this time traveling thing, which of the characters would end up murdered, why, and if they could possibly change that from happening.

The story had a great start, introducing us to Elena's ability and her situation. As a foster kid approaching her eighteenth birthday, she was desperate to find a job to pay for college. In comes this strange corporation with a deal that was too good to be true, but it seemed like a way out for Elena and they only required her to use her skill.

I liked Elena's character; her toughness and the way she wanted to help those who couldn't help themselves was commendable. Because of her father, she believed that there was a terrible side of her and I was so happy that as the story progressed, Adam made her see that she wasn't a bad person because she was always fighting for justice.

It didn't take long for things to kick off. We're quickly introduced to the other foster kids, and one in particular that I didn't really trust from the getgo, but turned out to be okay in the end. I found it interesting that these kids would sign up for this but I guess desperation can make people do crazy things, even time travel on behalf of a corporation they knew nothing about.

I was just as curious as the characters were about what the future looked like. Certain things were fascinating, and other things made me hope it would really come to pass. There was also some intrigue and a bit of mystery, especially after Elena overheard that conversation prior to going to the future, and the fact that they were sent a few years farther than what they were told. And I still wanted to find out who was going to be killed and why, I had no idea that twist was coming and that it would change things so much for the kids. My interest was held specifically because of that, but I just wish there were more elements of sci-fi and action in the midst. I don't know, it just seemed like there were scenes that lagged, and some could have been more. Those small things bothered me. That and the fact that Elena wasn't truthful from the moment she discovered certain significant details about the others. Even though she feared their reaction and not having their trust, I think it could have changed things for the better towards the end, and maybe certain characters would still be alive.  Well, she wasn't the only person keeping secrets so perhaps if everyone had been clear from start things would have been different. Either way, it was still a good story.

Not sure where the author will take the story for the second book because of the way this one worked out and I just can't see what could be done next. But regardless, I'm still curious and will probably read it because I'm happy that Elena managed to find some sense of happiness.

About the Author
Elizabeth Briggs is a full-time geek who writes books for teens and adults. She graduated from UCLA with a degree in Sociology, currently mentors teens in writing, and volunteers with a dog rescue group. She's the author of the new adult Chasing The Dream series and the upcoming young adult novel Future Shock. Elizabeth lives in Los Angeles with her husband and a pack of fluffy dogs.