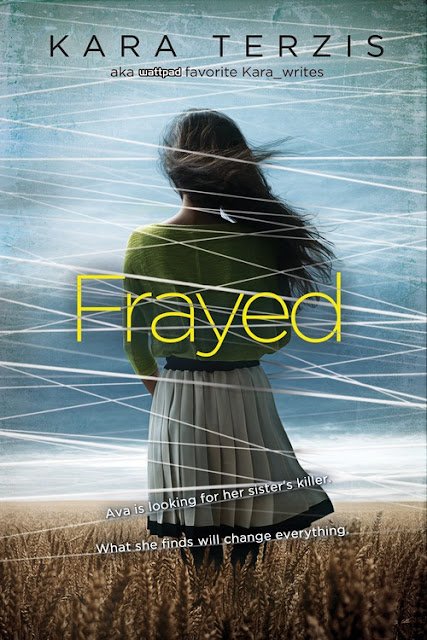 My therapist tells me I should write you a letter. Like flushing all my thoughts and feelings out of my system and onto paper. I tell her it's a stupid idea.

But here I am, writing a letter to a dead girl. Where do I start? Where did our story begin? From the moment you were born...or died?

I'll start with the moment I found out the truth about you. Your lies and my pain. Because it always begins and ends with you.
And that end began when Rafe Lawrence came back to town...

Ava Hale will do anything to find her sister's killer...although she'll wish she hadn't. Because the harder Ava looks, the more secrets she uncovers about Kesley, and the more she begins to think that the girl she called sister was a liar. A sneak. A stranger.

And Kesley's murderer could be much closer than she thought...

A debut novel from Wattpad award-winner Kara Terzis, Frayed is a psychological whodunit that will keep you guessing!

I was intrigued in the beginning, especially since Ava was writing to her dead sister and was clearly on a mission to find out who killed her. I'm a huge fan of mystery so I thought this book was right up my alley. And while Frayed had those dark elements, I felt like the story was a bit too rushed for me. Like there were parts that I wanted things to slow down so I could understand the character more. As a result, I couldn't connect with her and it was hard for me to feel for her pain of loss and dealing with insecurities due to her face being scarred. Another thing that happened too fast to me was the way how her relationship turned out, along with what happened between her and her best friend. I mean, there were hints about the friend's attitude at times, but I just wanted more from these characters.

Speaking of hints, the one thing I liked most about the story is that you couldn't really figure out who killed Kelsey. At one point I thought it was the mom, her friend Lia, then the bad girls from school, and like Ava I even thought Rafe was involved somehow. I didn't realize that those subtle scenes having to do with Ava's behavior was a sign. So the ending came as a surprise and I liked it a lot. I rarely read books about such things so that was an interesting way to solve the mystery of Kelsey's murder.

Overall, an interesting and dark story with great potential. I just wanted more from Ava. Still a good read if you're looking for something quick and mysterious.

About the Author
Kara Terzis was twelve when she wrote her first novel, and hasn’t stopped writing since. Later she started publishing her work on Wattpad, where in 2013 she won the Sourcebooks Story Development Prize, leading to the publication of her debut novel, Frayed. She adores fairy tales, photography, rainy days, and film soundtracks. When she’s not writing, you can find her buried in a good book and daydreaming. She lives with her family in Sydney, Australia.