It's great having Author Andrew Joyce back on the blog. Check out his awesome guest post and do pick up his latest release, Yellow Hair. 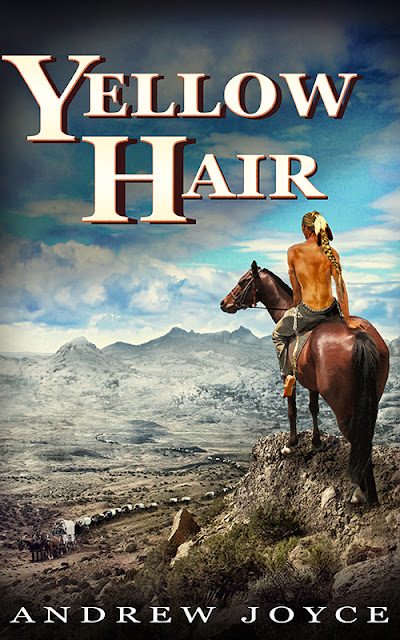 
Yellow Hair documents the injustices done to the Sioux Nation from their first treaty with the United States in 1805 through Wounded Knee in 1890.


The historical figures that play a role in this fact-based tale of fiction were real people and the author uses their real names.


Yellow Hair is an epic tale of adventure, family, love, and hate that spans most of the 19th century. This is American history.

My name is Andrew Joyce and I write books for a living. Shane has been kind enough to allow me a little space on her blog to talk about my latest, Yellow Hair.

The inspiration for the book came to me when I was reading a short article and it made reference to the Great Sioux Uprising of 1862. It also mentioned that the outcome involved the largest mass execution in the history of the United States. That piqued my interest.

When I started my research into the incident, one thing led to another and before I knew it, I was documenting the entire history of the Sioux, who are also known as the Dakota, vis-à-vis the relationship between them and the United States.

Because the book exists only because I read the phrase, “the largest mass execution in the history of the United States,” I’ll tell you a little about that. What follows is an extremely abbreviated version of events.

The Dakota signed their first treaty with the United States in 1805 when they sold a small portion of their land to the Americans for the purpose of building forts. It was right after the Louisiana Purchase and President Jefferson wanted a presence in the West. At the time, “the West” was anything on the western side of the Mississippi River.

In the treaty of 1805, the Dakota sold 100,000 acres to the Americans. The agreed-upon price was $2.00 per acre. But when the treaty came up before the Senate for ratification, the amount was changed to two cents per acre. That was to be a precursor for all future treaties with the Americans. There were subsequent treaties in 1815, 1825, 1832, 1837, and 1851, and basically the same thing happened with all those treaties.

In 1837, the Americans wanted an additional five million acres of Dakota land. Knowing it would be a hard sell after the way they failed to live up to the letter or spirit of the previous treaties, the government brought twenty-six Dakota chiefs to Washington to show them the might and majesty that was The United States of America.

The government proposed paying one million dollars for the acreage in installments over a twenty-year period. Part of the payment was to be in the form of farm equipment, medicine, and livestock. Intimidated, the Indians signed the treaty and went home. The United States immediately laid claim to the lands—the first payment did not arrive for a year.

The significance of the 1837 treaty lies in the fact that it was the first time “traders” were allowed to lay claim to the Indians’ payments without any proof that money was owed . . . and without consulting the Indians. Monies were subtracted from the imbursements and paid directly to the traders.

By 1851, the Americans wanted to purchase all of the Dakota’s remaining lands—twenty-five million acres. The Sioux did not want to sell, but were forced to do so with threats that the army could be sent in to take the land from them at the point of a gun if they refused the American’s offer.

“If we sell our land, where will we live?” asked the Dakota chief.

“We will set aside land for the Dakota only. It is called a reservation and it will be along both banks of the Minnesota River, twenty miles wide, ten on each side and seventy miles long. It will be yours until the grasses no longer grow,” answered the Commissioner of Indian Affairs.

The Dakota were offered six cents an acre for land that was worth at least a dollar an acre. The payment would be stretched out over a twenty year period and was to be made in the form of gold coins. One year later, in 1852, the Americans took half the reservation, the seventy miles on the north side of the river. The Dakota were now reduced from a nation of fierce, independent people to a people dependent on hand-outs from the ones who stole not only their land, but also their dignity.

The Dakota were forced to buy their food from the traders who ran trading posts at the Indian Agency the U.S. Government had set up on the reservation. All year long the Dakota would charge what they needed. When the yearly payment for their land arrived, the traders would take what they said was owed them. Subsequently, there was very little gold left for the Dakota.

By 1862, the Dakota were starving. That year’s payment was months late in arriving because of the Civil War. The traders were afraid that because of the war there would be no payment that year and cut off the Dakota’s credit. The Indian Agent had the power to force the traders to release some of the food stocks, but refused when asked to do so by the Dakota.

After they had eaten their ponies and dogs, and their babies cried out in the night from hunger, the Dakota went to war against the United States of America.

They attacked the agency first and liberated the food stock from the warehouse, killing many white people who lived there. Then bands of braves set out to loot the farms in the surrounding countryside.

Many whites were killed in the ensuing weeks. However, not all of the Dakota went to war. Many stayed on the reservation and did not pick up arms against their white neighbors. Some saved the lives of white settlers. Still, over 700 hundred whites lost their lives before the rebellion was put down.

When the dust settled, all of the Dakota—including women and children, and those people who had saved settlers’ lives—were made prisoners of war.

Three hundred and ninety-six men were singled out to stand trial before a military commission. They were each tried separately in trials that lasted only minutes. In the end, three hundred and three men were sentenced to death.

Even though he was occupied with the war, President Lincoln got involved. He reviewed all three hundred and three cases and pardoned all but thirty-eight of the prisoners.

On a gray and overcast December morning in 1862, the scaffold stood high. Thirty-eight nooses hung from its crossbeams. The mechanism for springing the thirty-eight trap doors had been tested and retested until it worked perfectly. At exactly noon, a signal was given, a lever pulled, and the largest mass execution to ever take place in the United States of America became part of our history.

Andrew Joyce left high school at seventeen to hitchhike throughout the US, Canada, and Mexico. He wouldn’t return from his journey until decades later when he decided to become a writer. Joyce has written five books, including a two-volume collection of one hundred and fifty short stories comprised of his hitching adventures called BEDTIME STORIES FOR GROWN-UPS (as yet unpublished), and his latest novel, YELLOW HAIR. He now lives aboard a boat in Fort Lauderdale, Florida, with his dog, Danny, where he is busy working on his next book, tentatively entitled, MICK REILLY.