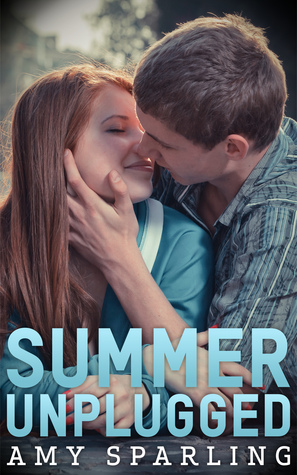 
Bayleigh is addicted to her cell phone and her mom has had enough. After catching her sending a less than lady-like photo to a boy who barely knows her, Bayleigh's mom sends her away to her grandparent's house for the summer--sans cell phone, laptop and Ipod.

Bayleigh thinks the summer will be torture without social media...that is until she meets the boy next door.

I liked Summer Unplugged. Yes it was a short story that I felt would've connected me more to the characters had there been more length, but it was still interesting nonetheless. I mean, how many of us can disconnect ourselves from our cell phones or computer? Not many, I think. This story is a good representation of how attached one teenager is to technology and how naive some girls can be with unhealthy relationships, but how nice it is to finally have that wake up call.

Bayleigh was childish and complacent at times, even did silly things because she was blinded by her crush. Bayleigh is like most young girls her age and I thought the character depicted the right attitude. I wasn't expecting her to be super mature or anything that would have me wondering if I was reading about someone in her thirties. That to me was good in itself.

Her reaction to the uncool request of her crush was realistic, because as much as we're reading and shaking our heads and calling her stupid, girls do that a lot in society and put themselves in bad situations. Thankfully, nothing like what I feared would happen to her from that mistake did, and I was happy she had an epitome while enduring her so-called punishment of spending the summer with her grandparents and away from all her gadgets.

In comes this other guy who is by far more appealing and more deserving of any girl's interest. He basically helps Bayliegh to realize she's worth far more than what she settles for with her crush and I was beyond relief when she finally got it together. Though, there were times I wanted to slap her silly for actually considering to ignore his crappy personality and ill-treatments. Anyhoo, that aside, I'm happy she found happiness with the right kind of guy for her. Someone that will most definitely treat her right.

Overall, it was a cute, fast-paced and enjoyable story. Again, it could've been lengthier, but I did like it and am so going to continue the series. If you're into YA contemporary with sweet romances you'll enjoy this one.

Amy Sparling is a native Texan with a fear of cold weather and a coffee addiction that probably needs an intervention. She loves books, sarcasm, nail polish and paid holidays. She lives near the beach with her daughter, one spoiled rotten puppy and a cat who is most likely plotting to take over the world.

Posted by Shane @ItchingforBooks at 7:23 AM