Review: One Was Lost by Natalie D. Richards 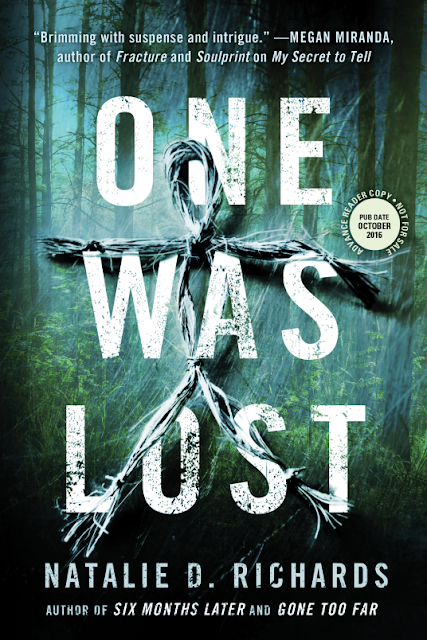 
Damaged. Deceptive. Dangerous. Darling. Are they labels or a warning? The answer could cost Sera everything.

Murder, justice, and revenge were so not a part of the plan when Sera set out on her senior camping trip. After all, hiking through the woods is supposed to be safe and uneventful.

Then one morning the group wakes up groggy, confused, and with words scrawled on their wrists: Damaged. Deceptive. Dangerous. Darling. Their supplies? Destroyed. Half their group? Gone. Their chaperone? Unconscious. Worst of all, they find four dolls acting out a murder—dolls dressed just like them.

Suddenly it's clear; they're being hunted. And with the only positive word on her wrist, Sera falls under suspicion…

This is my third time reading a Natalie D. Richards book and honestly, I was hoping for more after that blurb. It filled me with intrigue, seeing as the characters were camping in the woods. I like that setup; it's dark and alluring, the perfect mix for a suspense novel. But throughout One Was Lost, while the mystery held my attention, I kept wanting more.

I liked how it started out with the characters already in the woods and about to start heading back. It would have been fine like that, but then Sera hinted at a kiss that happened with one of the guys and the roller-coaster emotions between them that went on was just frustrating. In fact, I didn't care for it at all. In their present situation, I felt like the romance could've stayed out of it. I don't know, it just didn't seem to blend in with the rest of the story, especially after realizing a dangerous person was lurking around your camp planning to kill you and you weren't even sure if it was one of the people you were with.

There was also the issue of not really connecting with them. But that didn't deter me and aside from that and the romance thing, I did enjoy the mystery and wanted to know who had drugged them and had written on them. I liked that the author kept us guessing. I mean, I suspected ALL of them. Even Sera, thought maybe she had split personalities or something lol. And then I believed it was the guy she so loved and pretended not to. Then I was convinced it was their remaining teacher. I mean, why take his students out to a place where tragedy had occurred before? That was suspicious on his part. So yeah, the mystery of who the culprit was kept the story alive for me and in the end, I was truly surprised by who it turned out to be.

To conclude, not a bad novel with a dark setting and creepy moments so fitting for the season. The writing was fluid. The overall mystery will keep you hooked. 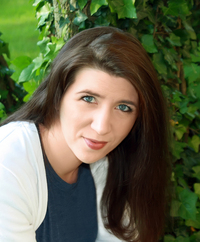 Lifelong Ohioan, Natalie D. Richards, spent many years applying her writing skills to stunningly boring business documents. Fortunately, she realized she’s much better at making things up, and has been writing for teens ever since. A champion of aspiring authors, Richards is a frequent speaker at schools, libraries, and writing groups. She lives in Ohio with a Yeti, a Wookie (her dogs) and her wonderful husband and children.