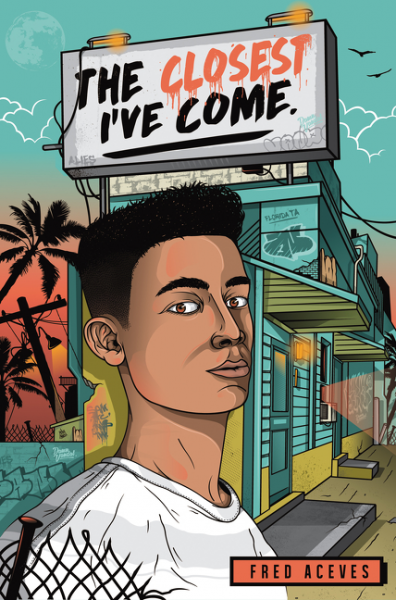 
The Closest I’ve Come is a must-read from talented first-time author Fred Aceves, in the tradition of Walter Dean Myers.

Marcos Rivas wants to find love.
He’s sure as hell not getting it at home, where his mom’s racist boyfriend beats him up. Or from his boys, who aren’t exactly the “hug it out” type. Marcos yearns for love, a working cell phone, and maybe a pair of sneakers that aren’t falling apart. But more than anything, Marcos wants to get out of Maesta, his hood—which seems impossible.

When Marcos is placed in a new after-school program for troubled teens with potential, he meets Zach, a theater geek whose life seems great on the surface, and Amy, a punk girl who doesn’t care what anyone thinks of her. These new friendships inspire Marcos to open up to his Maesta crew, too, and along the way, Marcos starts to think more about his future and what he has to fight for. Marcos ultimately learns that bravery isn’t about acting tough and being macho; it’s about being true to yourself.

About the Author
Fred Aceves is a Latino author who grew up in a community like the one described in The Closest I’ve Come, a tough, working-class neighborhood filled with single moms. He attended five high schools and worked two jobs before eventually dropping out of school. He later earned his GED and traveled around the world. He was born in the United States and currently lives in Mexico with his wife. The Closest I’ve Come is his debut novel.